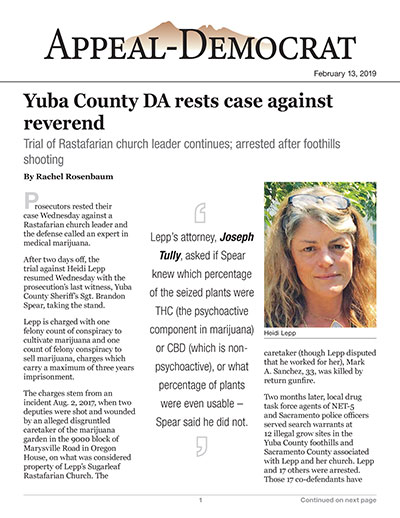 Prosecutors rested their case Wednesday against a Rastafarian church leader and the defense called an expert in medical marijuana.

The charges stem from an incident Aug. 2, 2017, when two deputies were shot and wounded by an alleged disgruntled caretaker of the marijuana garden in the 9000 block of Marysville Road in Oregon House, on what was considered property of Lepp’s Sugarleaf Rastafarian Church. The caretaker (though Lepp disputed that he worked for her), Mark A. Sanchez, 33, was killed by return gunfire.

Spear testified about evidence found at the various illegal grow sites, including marijuana plants, cash and a Sugarleaf binder with signed agreements between the church and growers. He said growers told him and other law enforcement officers the marijuana was expected to be sold on the black market and the church offered members protection from the authorities.

“They had no contact with the church until after the takedown,” Spear said.

Two-pound samples from each property were taken, he said, though they haven’t been tested; Deputy District Attorney John Vacek said if the defense was concerned with the samples not being tested, they could have made a motion to do so. Lepp’s attorney, Joseph Tully, asked if Spear knew which percentage of the seized plants were THC (the psychoactive component in marijuana) or CBD (which is non-psychoactive), or what percentage of plants were even usable – Spear said he did not.

When Spear discussed the thousands of dollars of cash and assets seized, Tully questioned if he had investigated how much money was coming in to the church versus how much went to expenses. Tully also asked if growers could be expected to have cash on hand, considering federal laws make cannabis cultivation a cash-only business – Spear said it could probably be expected.

Spear testified that Lepp gave him a list of her associated grow sites and that they had corresponded via telephone and email a handful of times following the officer-involved shooting.

“Is it typical for a heroin or coke dealer to call or email you to tell you they’re opening up drug houses?” Tully asked Spear.

Despite Lepp growing openly in Yuba County since 2014, Spear testified that he didn’t feel any of her grows were legitimate.

The defense started its case with testimony from Dr. Lawrence Badgley, a Eureka-based family and general medicine doctor who testified as an expert in medical marijuana. He was questioned about the dosage amounts of hashish and marijuana for patients versus opiates, and the benefits of marijuana as pain relief.

Vacek and Badgley went back and forth on whether or not Badgley believes any adult uses marijuana simply to get high and not as a patient. Badgley had difficulty answering what he called a philosophical question, but said he believes marijuana is a medicine and most adults have some sort of medical issue. He also testified that marijuana does not leave users’ with the same dependency issues as alcohol, heroin or methamphetamine.

The defense will call more witnesses today and both Tully and Vacek hope to conclude the case by Friday.