WRAPPING UP A LONG LEGAL ORDEAL FOR MARIJUANA DISPENSARY 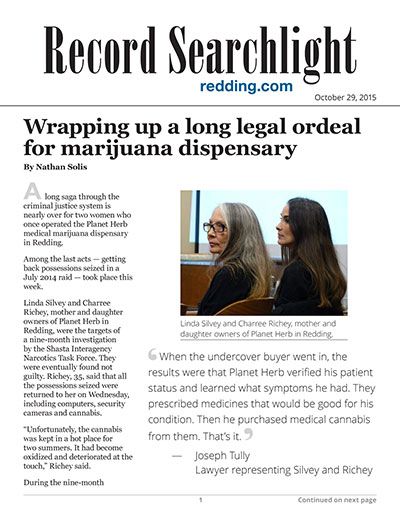 A long saga through the criminal justice system is nearly over for two women who once operated the Planet Herb medical marijuana dispensary in Redding.

Among the last acts — getting back possessions seized in a July 2014 raid — took place this week.

Linda Silvey and Charree Richey, mother and daughter owners of Planet Herb in Redding, were the targets of a nine-month investigation by the Shasta Interagency Narcotics Task Force. They were eventually found not guilty. Richey, 35, said that all the possessions seized were returned to her on Wednesday, including computers, security cameras and cannabis.

“Unfortunately, the cannabis was kept in a hot place for two summers. It had become oxidized and deteriorated at the touch,” Richey said.

During the nine-month investigation, an undercover informant posed as a patient at Planet Herb, located on Hilltop Drive in Redding, and purchased medical marijuana.

Lawyer Joseph Tully, who represented Silvey and Richey, said that Planet Herb had a good relationship with law enforcement in Redding.

“This was a dispensary. They had an open door policy with the police,” Tully said. “When the undercover buyer went in, the results were that Planet Herb verified his patient status and learned what symptoms he had. They prescribed medicines that would be good for his condition. Then he purchased medical cannabis from them. That’s it.”

In January of this year, a jury deadlocked on the criminal trial filed against the pair by the Shasta County District Attorney’s Office. In March a 12-person jury found the two not guilty on all charges.

But the District Attorney’s Office filed a civil petition through the Shasta County courts.

“Normally speaking, if the district attorney loses at the criminal phase, they tend to dismiss the civil part,” said Tully.

The District Attorney’s Office seized assets from Richey and Silvey, including about $114,000, according to Richey. As of Thursday, they still have not received the money back.

In a search warrant and affidavit made available to the Record Searchlight, law enforcement officials describe the nine-month investigation where an undercover informant purchased medical marijuana from the staff of Planet Herb.

The author of the affidavit report details the buys, but a jury found that Planet Herb did not break any laws as a medical marijuana dispensary.

“I would have liked to have stayed here,” said Richey, who still owns the building where Planet Herb was located.

Planet Herb was one of the last marijuana dispensaries in Redding to challenge the city’s ordinance that closed down all dispensaries in 2013. Richey, along with Tully, believe this is why the business was targeted so harshly by law enforcement.

A majority of Planet Herb’s patients were senior citizens and some were terminally ill, according to Richey.

“What happens to these people is you drive them underground to the black market to get their medicine, where there’s no quality control or regard for medical concern,” Richey said.

Despite all the legal troubles Richey encountered during the trials, she can’t help but look back at the business she ran for six years in Redding.

“I know that you shouldn’t use the word hurt in legal or political arenas, but I was hurt. I put six years into the business that they destroyed. It’s not a joke. We have to stand up and say no to these actions. There are worse things in the world than people getting their medicine from a store,” Richey said.

“We just have to have a voice. The more you speak up about it the better.”