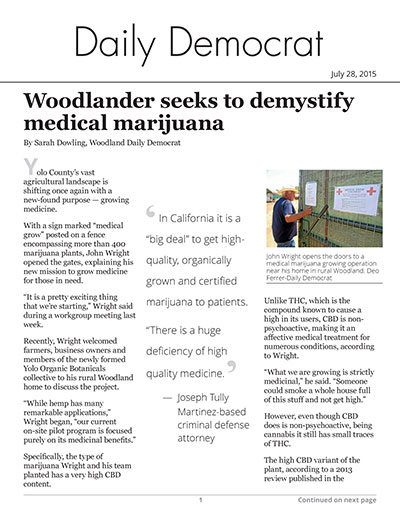 With a sign marked “medical grow” posted on a fence encompassing more than 400 marijuana plants, John Wright opened the gates, explaining his new mission to grow medicine for those in need.

“It is a pretty exciting thing that we’re starting,” Wright said during a workgroup meeting last week.

“While hemp has many remarkable applications,” Wright began, “our current on-site pilot program is focused purely on its medicinal benefits.”

Specifically, the type of marijuana Wright and his team planted has a very high CBD content.

Unlike THC, which is the compound known to cause a high in its users, CBD is non-psychoactive, making it an affective medical treatment for numerous conditions, according to Wright.

“What we are growing is strictly medicinal,” he said. “Someone could smoke a whole house full of this stuff and not get high.”

However, even though CBD does is non-psychoactive, being cannabis it still has small traces of THC.

The high CBD variant of the plant, according to a 2013 review published in the British Journal of Clinical Pharmacology, combats nausea and vomiting, seizures, psychosis disorders, inflammatory disorders, neurodegenerative disorders, anxiety and depression.

Growing medical marijuana on his property was an idea Wright had been toying around with for some time, and when he finally decided to go for it, he thought the project would take a few years to come to fruition.

However, to his surprise, all the pieces fell into place much sooner, allowing him to begin clearing the land at the end of April.

Now, Yolo Organic Botanicals is just a month away from its first harvest.

Planting cannabis is one thing. Doing so while adhereng to state regulations is another.

Joseph M. Tully, a Martinez-based criminal defense attorney representing Wright’s collective, said California’s guidelines for growing medical cannabis are not as complex as they may seem.

“Medical marijuana law in California boils down to the amount of marijuana that you have responsibility for relation to the patients’ condition,” Tully explained. “If you have one patient that needs 30 to 40 pounds a year, the collective can grow that much to accommodate that patient.”

This simple ratio is something Yolo Organic Botanicals, and other California collectives, must abide by.

Wright’s team is working with a number of other area collectives to bring their brand of medicine directly to those who need it — creating a client-base of around 2,000 people.

“Not everyone who needs it has the ability to grow it,” Tully added, noting he has around 25 years of experience with these types of cases. “Yolo Botanicals has a lot more patients than they can supply medicine for.”

Tully explained that in California it is a “bid deal” to get high-quality, organically grown and certified marijuana to patients.

“There is a huge deficient of high quality medicine,” he said.

With Tully’s help, Yolo Organic Botanicals continues to be in compliance, abiding by state guidelines on growing and distribution.

One way Wright and his team are getting their product to patients is by partnering with Pedro Rivas’ business CleverTree.

A Sacramento-based operation, CleverTree is an app where customers can order medical marijuana and have it delivered straight to their homes.

By partnering with Rivas, Yolo Botanicals has access to CleverTree patients, broadening their client-base and thus, expanding the size of their operation.

Rivas was present during last week’s workgroup meeting, getting a tour of the fenced enclosure housing 420 medical marijuana plants — a number, which Wright claims is accidental.

Transparency is important to Wright, who went straight to the Yolo County Sheriff’s Department after he decided to follow through with the project.

Jumping over the right legal hurdles, Wright explained his plan to them, and Sheriff deputies have expanded their patrols to make sure there are no security problems.

“A lot of people are in the shadows growing marijuana,” he said. “It is a war zone and we want to help clean that up.”

Looking ahead, Wright plans to install security cameras and other measures to keep the plants secure.

For Robin Miller, another Yolo Organic Botanicals member, she sees the project as an opportunity to educate others.

“There is a lack of education and people have a lot of misconceptions about what cannabis is and what it can do,” she said. “It really is awesome medicine.”

Apart from medicinal use, marijuana can be used for things like clothing and even construction.

Known as “hempcrete,” a mixture of the woody cores of hemp, called hurds or shives, and lime is now being used to build structures.

Either cast as blocks and finished with lime stucco or sprayed between walls as a paste, the material dos not bear structural weight, but does form well-insulated walls and foundations.

“It’s a material that gets stronger with age,” Miller said, smiling.

Miller explained that high-temperature areas like Yolo County are the ideal place to grow marijuana.

“The more sun it gets, the better it grows,” she said.

One of Yolo Organic Botanicals long-range goals is to make Yolo County be for hemp what Napa is for wine.

“In Yolo County, we are poised to do that,” Miller said.