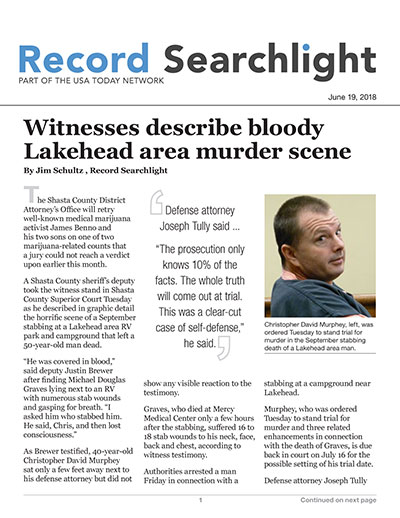 A Shasta County sheriff’s deputy took the witness stand in Shasta County Superior Court Tuesday as he described in graphic detail the horrific scene of a September stabbing at a Lakehead area RV park and campground that left a 50-year-old man dead.

“He was covered in blood,” said deputy Justin Brewer after finding Michael Douglas Graves lying next to an RV with numerous stab wounds and gasping for breath. “I asked him who stabbed him. He said, Chris, and then lost consciousness.”

As Brewer testified, 40-year-old Christopher David Murphey sat only a few feet away next to his defense attorney but did not show any visible reaction to the testimony.

Graves, who died at Mercy Medical Center only a few hours after the stabbing, suffered 16 to 18 stab wounds to his neck, face, back, and chest, according to witness testimony.

Murphey, who was ordered Tuesday to stand trial for murder and three related enhancements in connection with the death of Graves, is due back in court on July 16 for the possible setting of his trial date.

Defense attorney Joseph Tully said after a morning-long preliminary hearing, however, that Murphey did not murder Graves.

“This was a clear-cut case of self-defense,” he said.

But that may be up to a jury to decide.

Murphey was arrested on Sept. 8 by Siskiyou County law enforcement south of Yreka and booked the following day into Shasta County Superior Court.

According to a sheriff’s investigation report, Murphey told them he acted in self-defense during what was a “mutual combat” fight.

According to the sheriff’s report, deputies were called around 2:30 p.m. on Sept. 8 to the Lake Shasta Pines RV Resort & Campground on Solus Campground Road for a stabbing after a tenant reported a bloodied man came to her trailer seeking help for his injuries.

Another park tenant, who identified herself Tuesday as Debbie Duster, but who is also known as Sonya Moore, testified she saw Murphey drive by in his blue pickup with a large amount of blood on his face as she was walking along the park’s main road, the sheriff’s report said.

“He was all bloody,” Duster said. “It was like nasty.”

But she said Murphey told her he could not stop to talk and drove out of the park.

Later, she said, Murphey called her to see what was going on at the park. After she told him, she said, he asked if anyone was being sought.

Duster, who said she knew Graves better than she knew Murphey, testified that Murphey was always nice and polite to her.

But, she said, Graves could be very rude and “had a bad temper.”

Deputies, who spoke with other tenants at the park, said Murphey lived north of the trailer park on Wells Way and went to his residence, according to the sheriff’s report.

While there, Murphey’s 45-year-old brother, James D. Johnson, approached a deputy and told him he had just met with his brother by the railroad tracks near the Klondike Klub restaurant in northern Lakehead and that his brother was badly injured.

Johnson said he tried to encourage his brother to turn himself into law enforcement, but his brother refused.

In his conversation with the deputy, Johnson said his brother told him he had gone to a man’s residence to confront him over being called a child molester, the sheriff’s report said.

The two began to argue, and Johnson said he was told by his brother that Graves stabbed him in the right arm and leg, the sheriff’s report said.

“Murphey told Johnson he grabbed a knife in self-defense and stabbed back at his attacker and then left,” the sheriff’s report says. “Johnson told Detective (Craig) Tippings he tried to get Murphey to turn himself in, but Murphey told him he ‘wanted to die.'”

A murder weapon was never found.

Murphey was later arrested near Yreka without incident and was taken to Fairchild Medical Center for treatment of injuries to his arm and leg.

A detective who tried to speak with Murphey at the hospital said he would not talk to him without having an attorney present, the sheriff’s report said.

But Murphey did say, “Whatever happened between us was mutual combat” without elaboration, the report said.

According to electronic court records, Murphey has a Shasta County criminal history dating back to 2002 that includes various offenses.

Among them are convictions for receiving stolen property, as well as felony DUI with injury, which netted him a seven-year prison sentence in 2007.

Court records do not show any child molestation cases for Murphey, while those records also show that Graves had a Shasta County criminal history, which went back to 1987.