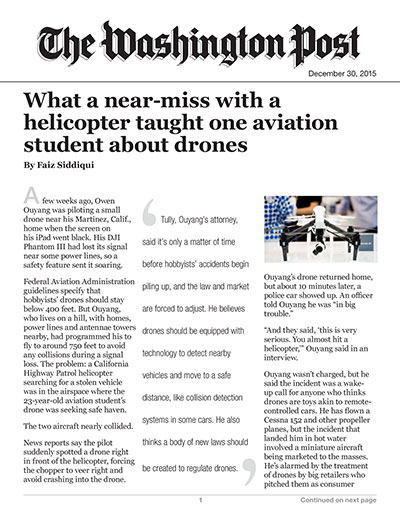 A few weeks ago, Owen Ouyang was piloting a small drone near his Martinez, Calif., home when the screen on his iPad went black. His DJI Phantom III had lost its signal near some power lines, so a safety feature sent it soaring.

Federal Aviation Administration guidelines specify that hobbyists’ drones should stay below 400 feet. But Ouyang, who lives on a hill, with homes, power lines and antennae towers nearby, had programmed his to fly to around 750 feet to avoid any collisions during a signal loss. The problem: a California Highway Patrol helicopter searching for a stolen vehicle was in the airspace where the 23-year-old aviation student’s drone was seeking safe haven.

News reports say the pilot suddenly spotted a drone right in front of the helicopter, forcing the chopper to veer right and avoid crashing into the drone. Ouyang’s drone returned home, but about 10 minutes later, a police car showed up. An officer told Ouyang he was “in big trouble.”

“And they said, ‘this is very serious. You almost hit a helicopter,’” Ouyang said in an interview.

Ouyang wasn’t charged, but he said the incident was a wake-up call for anyone who thinks drones are toys akin to remote-controlled cars. He has flown a Cessna 152 and other propeller planes, but the incident that landed him in hot water involved a miniature aircraft being marketed to the masses. He’s alarmed by the treatment of drones by big retailers who pitched them as consumer products that can be flown by anyone, making them one of the hottest Christmas gifts of the season.

At one point, the FAA expected more than a million to be sold in the holiday season.

“They were advertised to be a toy, something that you can fly out of the box without any training,” Ouyang said. “People should know that a drone is definitely not a toy … There’s a lot of potential problems for those people who have no experience in aviation to get this kind of drone.”

Ouyang’s was one of a catalog of near-misses experienced by drone pilots in the past year. Earlier this month, the International Ski Federation banned camera drones at World Cup races after a drone crashed onto a course in Italy, nearly hitting an Olympic silver medalist.

In August, the pilot of an Allegiant Air flight on approach to Los Angeles International Airport reported a smaller drone under the airliner’s wing “almost hit us.” That same month a United Airlines pilot said a “pizza-sized” drone passed just under his plane.

Recent Post coverage shows pilots have reported a surge in close calls with drones. Nearly 700 incidents of this nature have occurred so far this year, according to FAA statistics, about triple the number recorded for all of 2014.

Ouyang’s attorney, Joseph Tully, said it is disconcerting that thousands of kids likely had the same model drone as Ouyang’s under their Christmas trees last week.

“My client is a student pilot. He’s flown six or seven different aircraft on his own. He went to Google and researched all the FAA guidelines for drones. He went into the setting and made some adjustments which he felt would provide for safer flying,” Tully said in a recent interview.

“And despite all that, he had a near miss with a CHP helicopter. He could potentially have been in hot water. Despite somebody with a background, training, willingness, the right attitude, sort of the perfect person we would want to be out there piloting drones, we almost had this calamity.”

Ouyang apologized for the incident, but faced criticism from some who said it was irresponsible to let the aircraft fly above the FAA’s ceiling. Tully, his attorney, says the FAA guidelines simply aren’t clear enough for fliers, and drones aren’t equipped with technology out of the box to prevent accidents.

Gregory S. McNeal, an associate professor of law and public policy at Pepperdine University whose area of focus includes drones, said it is Ouyang who was in the wrong. Ouyang, he said, “chose to knowingly disable a safety feature, allowing his drone to fly at twice the legal altitude, and now he wants to blame his choice on the device and have government impose greater burdens on people who don’t make decisions to operate unlawfully.”

McNeal said the existing FAA guidelines “have teeth” and are sufficient for regulating drone operation. The FAA announced new regulations in December requiring drones to be registered and marked with registration numbers in order to fly; criminal penalties for failure to do so include fines up to $250,000 and imprisonment up to three years.

McNeal said the potential for safety issues is minimal, especially given that millions are flying daily, and few incidents are reported. He added that drones “make a great Christmas present,” by empowering people to gather information and imagery in a low-cost way and encouraging children to pursue STEM careers. Often he said, drones take the place of more hazardous activities.

“An important thing that people forget is that drones replace much riskier activities, like people climbing telephone poles, or manned helicopters filled with fuel, flying at low altitude,” he said.

But Tully, Ouyang’s attorney, said it’s only a matter of time before hobbyists’ accidents begin piling up, and the law and market are forced to adjust. He believes drones should be equipped with technology to detect nearby vehicles and move to a safe distance, like collision detection systems in some cars. He also thinks a body of new laws should be created to regulate drones.

McNeal, however, believes the regulations currently on the books are enough. In Ouyang’s case, he said, the pilot simply should have known better.

“We have enough laws for drones,” he said. “We just need people to start making smart decisions.”