TRENTON COP THREATENED TO PULL OUT GUN DURING ARGUMENT WITH HIS WIFE: 9-1-1 CALL 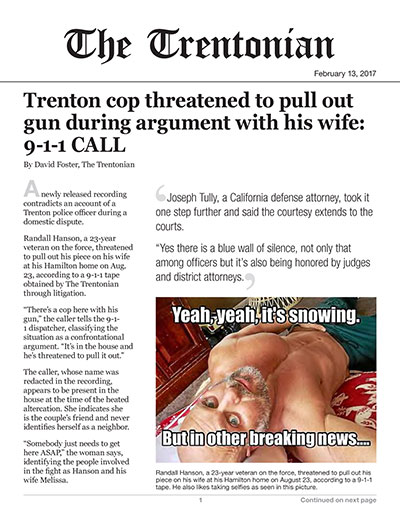 The Trentonian
by David Foster, February 13

A newly released recording contradicts an account of a Trenton police officer during a domestic dispute.

Randall Hanson, a 23-year veteran on the force, threatened to pull out his piece on his wife at his Hamilton home on Aug. 23, according to a 9-1-1 tape obtained by The Trentonian through litigation.

“There’s a cop here with his gun,” the caller tells the 9-1-1 dispatcher, classifying the situation as a confrontational argument. “It’s in the house and he’s threatened to pull it out.”

The caller, whose name was redacted in the recording, appears to be present in the house at the time of the heated altercation. She indicates she is the couple’s friend and never identifies herself as a neighbor.

“Somebody just needs to get here ASAP,” the woman says, identifying the people involved in the fight as Hanson and his wife Melissa.

When asked by the dispatcher if Hanson has his gun out, the woman says, “No, but it’s in the house.”

“He does have it,” the caller describes. “He hasn’t pulled it out yet.”

Police responded to Hanson’s home on the 100 block of Cypress Lane to investigate a “domestic in progress,” according to an incident report obtained by The Trentonian. However, no arrests were made because a crime did not occur, Kathleen Petrucci, an assistant Mercer County prosecutor, previously told The Trentonian.

Providing a conflicting account, Hanson took to social media on Aug. 30 to “cease speculation and rumors” about the lovers’ quarrel that he described as a “loud contentious verbal argument in which the police were called by a 3rd party.”

“I have never assaulted or threatened to assault Melissa nor threatened to harm myself,” Hanson wrote on Facebook. “I want to emphasize that I was not arrested or charged criminally.”

Authorities have been tight-lipped on Hanson’s case.

Casey DeBlasio, a spokeswoman for the Mercer County Prosecutor’s Office, said Monday that the agency “will not be providing any information” and has “no comment.”

Under state law, Hanson could potentially face a third-degree terroristic threats charge for the episode. State statue outlines an individual violates the law by threatening to commit a crime of violence to terrorize another.

Hanson, who constantly posts shirtless selfies of himself on his Facebook page and has a history of steroid abuse, said he voluntarily checked himself into a crisis center following the incident, where he was eventually “cleared by medical professionals from a behavioral health facility.”

Hanson has not returned to work following the incident, sources tell The Trentonian. The officer must also clear an internal physical and psychological examination before he returns to duty.

A Trenton police spokesman said Monday that the department does not comment on personnel issues.

Following the domestic flap, Hamilton wanted to keep a lid on the 9-1-1 recording from becoming public. The Trentonian requested a copy of the 9-1-1 tape, which is generally a public record, but was denied. The newspaper then sued the township and Hamilton decided to fork over the recording.

At the time of the incident, sources said that Hanson had worked armed security detail at Kingsbury Twin Towers in Trenton when he got into an argument with his wife over the phone. While FaceTiming her, sources said, he brandished a weapon. The fight picked back up at the couple’s home, where Hanson reportedly threatened to hurt himself.

“Feelings of abandonment, resentment, a lack of intimacy both physical and emotional and poor communication can take a toll on even the most loving and committed relationships,” Hanson said in his Facebook tell-all of their 23-year marriage. “An allegation was made that comments made during the argument were construed as though I was in danger of potentially harming myself.”

His wife admitted to filing a temporary restraining order against Hanson following the heated fight. In her own Facebook post, his wife denied Hanson threatened to hurt himself and strike her during the argument.

In the days following the fight, she said, she went before a Superior Court judge in Trenton and asked for the restraining order to be lifted because she didn’t fear her husband, nor believe she or her three children were in danger.

Writing that the whole “night in question was blown out of proportion,” she criticized The Trentonian for prying into her personal business.

“I was heated talking to the police,” she wrote. “I felt betrayed. And not only by Randall. And maybe I stretched it a bit because I was hurt and angry. At NO time did Randall threaten me or harm me in any way. I signed a restraining order because I didn’t want him to come home that night.”

The couple has since reconciled.

Hanson, who earned an annual salary of $97,612 last year, is no stranger to controversy.

In 2010, he was outed as one of several Trenton Police officers who used his government health insurance to purchase steroids. He and others were stripped of their service weapons and put on desk duty during an investigation but were later reinstated to the force, according to the Newark Star-Ledger.

Are the police protecting one of their own?

That is a question that is commonly asked when police and prosecutors investigate potential crimes against officers, such as in the Hanson case.

Experts have tackled the question before and believe a “blue wall of silence’ does exist.

“The blue wall of silence is really nothing more than the professional courtesy police officers routinely extend to one another,” New England criminal defense and civil rights attorney Norm Pattis previously told The Trentonian. “When it conflicts with the oath to tell truth far too many police officers are willing to commit perjury. Officers who place truth above loyalty often suffer.”

Joseph Tully, a California defense attorney, took it one step further and said the courtesy extends to the courts.

“Yes there is a blue wall of silence, not only that among officers but it’s also being honored by judges and district attorneys,” Tully said. “Every day in court I see examples of cops getting away with things that anyone else couldn’t and that being supported every time by judges and DAs. Legal objections (in front of judges) about police officers are handled differently than legal objections against anyone else.”