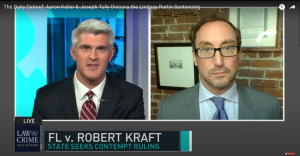 Exciting to be on Law & Crime Network today. I joined host Aaron Keller on The Daily Debrief. One of the trials in the news was the murder trial of Ohio babysitter Lindsay Partin, charged in the death of a 3-year-old girl she was babysitting. Today was her sentencing in the controversial “shaken baby” case, something I write about in my book “California: State of Collusion.”

In the Courtroom, and in my book, I cry FOUL and crusade against Prosecutor’s pushing bad “evidence” based on bad science in court. In a chapter on Science and the Law, I call out Shaken Baby Syndrome as a pseudoscientific diagnosis. A miscarriage of Justice that punishes loving parents still grieving over the accidental deaths of their babies.

Other cases discussed that day were: