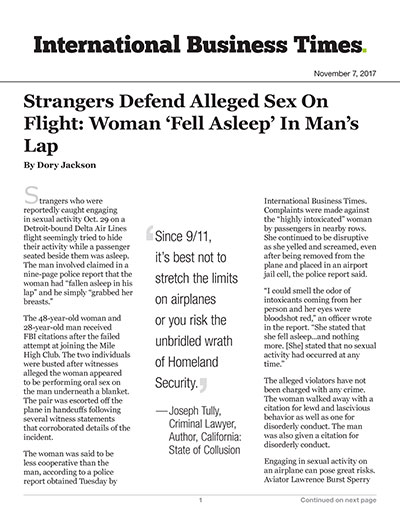 Strangers who were reportedly caught engaging in sexual activity Oct. 29 on a Detroit-bound Delta Air Lines flight seemingly tried to hide their activity while a passenger seated beside them was asleep. The man involved claimed in a nine-page police report that the woman had “fallen asleep in his lap” and he simply “grabbed her breasts.”

The 48-year-old woman and 28-year-old man received FBI citations after the failed attempt at joining the Mile High Club. The two individuals were busted after witnesses alleged the woman appeared to be performing oral sex on the man underneath a blanket. The pair was escorted off the plane in handcuffs following several witness statements that corroborated details of the incident.

The woman was said to be less cooperative than the man, according to a police report obtained Tuesday by International Business Times. Complaints were made against the “highly intoxicated” woman by passengers in nearby rows. She continued to be disruptive as she yelled and screamed, even after being removed from the plane and placed in an airport jail cell, the police report said.

“I could smell the odor of intoxicants coming from her person and her eyes were bloodshot red,” an officer wrote in the report. “She stated that she fell asleep…and nothing more. [She] stated that no sexual activity had occurred at any time.”

Engaging in sexual activity on an airplane can pose great risks. Aviator Lawrence Burst Sperry reportedly created the autopilot mode in 1914 to do things other than fly a plane, but the action isn’t considered to be entirely legal.

“The Mile High Club might be exclusive and tempting but consider that while no state law might be applicable if no one sees you, there are surely some number of federal agencies that will find the conduct actionable,” Joseph Tully, criminal lawyer and author of California: State of Collusion, told Bustle in 2015. “Since 9/11, it’s best not to stretch the limits on airplanes or you risk the unbridled wrath of Homeland Security.”

It’s common to walk away from airplane sex without any repercussions, Bustle reported, but the act is legally punishable. If individuals are caught engaging in sexual activity in England, their actions could result in a six-month prison stint.