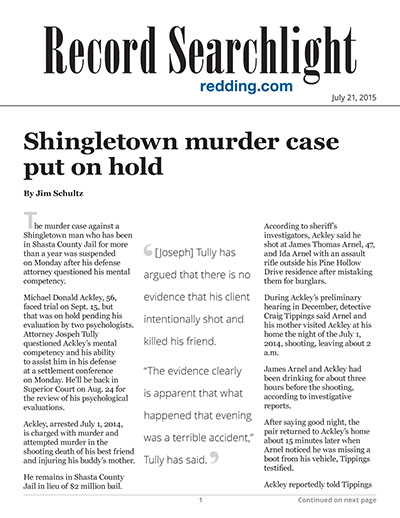 The murder case against a Shingletown man who has been in Shasta County Jail for more than a year was suspended on Monday after his defense attorney questioned his mental competency.

Michael Donald Ackley, 56, faced trial on Sept. 15, but that was on hold pending his evaluation by two psychologists. Attorney Joseph Tully questioned Ackley’s mental competency and his ability to assist him in his defense at a settlement conference on Monday. He’ll be back in Superior Court on Aug. 24 for the review of his psychological evaluations.

Ackley, arrested July 1, 2014, is charged with murder and attempted murder in the shooting death of his best friend and injuring his buddy’s mother.

He remains in Shasta County Jail in lieu of $2 million bail.

According to sheriff’s investigators, Ackley said he shot at James Thomas Arnel, 47, and Ida Arnel with an assault rifle outside his Pine Hollow Drive residence after mistaking them for burglars.

During Ackley’s preliminary hearing in December, detective Craig Tippings said Arnel and his mother visited Ackley at his home the night of the July 1, 2014, shooting, leaving about 2 a.m.

James Arnel and Ackley had been drinking for about three hours before the shooting, according to investigative reports.

After saying good night, the pair returned to Ackley’s home about 15 minutes later when Arnel noticed he was missing a boot from his vehicle, Tippings testified.

Ackley reportedly told Tippings that he saw three flashlights coming toward his property and a car parked about 80 feet away.

“Once he saw the flashlights on his property, he retrieved his AR-15,” Tippings wrote in an investigative report.

Ackley, who said he is disabled and a victim of previous thefts and assaults, shouted at the people to leave before opening fire from the porch of his trailer, striking and killing James Arnel, Tippings said.

Although Ida Arnel said she and her son identified themselves to Ackley, he told sheriff’s investigators he did not hear Arnel calling out.

Ackley fired 10 shots, Tippings said, also blasting out the driver’s side window of the car. Ida Arnel suffered some bruises and scratching and a wound to her wrist.

Arriving deputies reported finding Ackley“hugging” the body of his “best friend” wrapped in a blanket.

Tully has argued that there is no evidence that his client intentionally shot and killed his friend.

“The evidence clearly is apparent that what happened that evening was a terrible accident,” Tully has said.

Ida Arnell testified at the preliminary hearing that she began screaming when she saw her son fall to the ground.