‘SERIAL’ EPISODE 2 EXPLORES WHEN JUDGES CROSS A LINE, EVEN ORDERING DEFENDANTS TO STOP HAVING BABIES 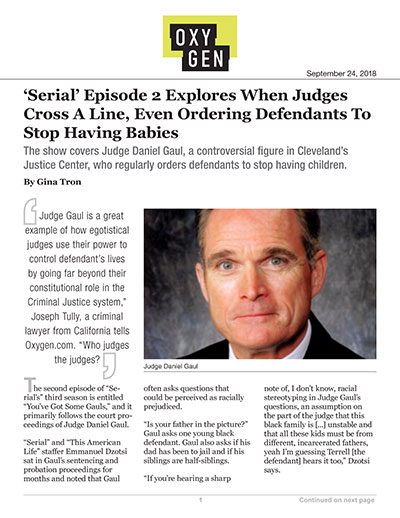 The second episode of “Serial’s” third season is entitled “You’ve Got Some Gauls,” and it primarily follows the court proceedings of Judge Daniel Gaul.

“Serial” and “This American Life” staffer Emmanuel Dzotsi sat in Gaul’s sentencing and probation proceedings for months and noted that Gaul often asks questions that could be perceived as racially prejudiced.

“Is your father in the picture?” Gaul asks one young black defendant. Gaul also asks if his dad has been to jail and if his siblings are half-siblings.

“If you’re hearing a sharp note of, I don’t know, racial stereotyping in Judge Gaul’s questions, an assumption on the part of the judge that this black family is […] unstable and that all these kids must be from different, incarcerated fathers, yeah I’m guessing Terrell [the defendant] hears it too,” Dzotsi says.

Gaul sentences him four months of probation, a light sentence seeing how he could have been given three years of jail, but he tells him that if he has another child out of wedlock that it will be a violation of his probation.

Dzotsi calls that order unconstitutional. He said that within the same day, Gaul put the same condition on two other defendants. Dzotsi noted that it’s all bluster, that Gaul has never made good on the threat.

Keith Swisher, Professor of Legal Ethics and Director of the Bachelor of Law and Master of Legal Studies Programs at the University of Arizona James E. Rogers College of Law, also told Oxygen.com that the order appears to be unconstitutional.

She said that although he has been criticized for being politically incorrect, Gaul told Koenig that’s the price he is willing to pay to “connect” with defendants.

“I’ve been criticized in the past for using a little slang or being a little too casual at times,” he says. “But I’m talking to a group of people and I want to speak to them in their idiom, in a language that they can understand.”

Koenig says that the controversial judge does take more time than he needs to with defendants and he appears to believe that he can help them.

Swisher said that many judges like Gaul often take the “scared-straight” judge approach because in a judicial court there aren’t a whole lot of tools.

“You can get probation or prison or get a stern talking to in the hopes that it will help the defendant change course but it’s hard to say whether that works in any individual case,” he said. “I know anecdotally there are cases where it seems like that stern colloquy with the defendant has worked.”

He said that the episode can be eye-opening in showing how much counseling, for lack of a better word, takes place inside courtrooms.

“I think it exposes a number of questions and weaknesses in the criminal justice system.”

Gaul isn’t the only judge in the episode with unconstitutional conditions.  Judge Sandra Collier-Williams required those on probation to register to vote. It was later ruled that this condition was unconstitutional.

Koenig describes a plea deal that Gaul improvised on the spot and seemed to push a defendant Carlton Hurd towards. He threatened Hurd with a harsh sentence which prompted him to take a plea deal for 14 years in prison for an attempted murder charge. Hurd was later acquitted on all charges after his family challenged Gaul’s decision.

“That’s improper conduct for a judge,” Swisher told Oxygen.com. “You can’t coerce a defendant to make a guilty plea. Most of the time you are really not supposed to participate as a judge in plea negotiations but that line varies over jurisdictions. Regardless, you can’t coerce someone into pleading guilty.”

Swisher added that it’s not fair for a judge to make threats of a harsh punishment because it’s the judge who will be doing the sentencing whether they take a plea deal or they are convicted through a trial.

“That case seemed to cross the line,” Swisher said of Hurd’s case.

Keonig states that even other judges admit that Gaul was wrong in that case, but points out that nobody holds him accountable or prompted an investigation.

“Judge Gaul is a great example of how egotistical judges use their power to control defendant’s lives by going far beyond their constitutional role in the Criminal Justice system,” Joseph Tully, a criminal lawyer from California tells Oxygen.com. “Who judges the judges?”

The season promises to cast a spotlight on the flaws of the justice system, just as it did in previous seasons, through highlighting common court cases at Cleveland’s Justice Center complex.  The complex houses the city’s police department and its municipal and district courts.