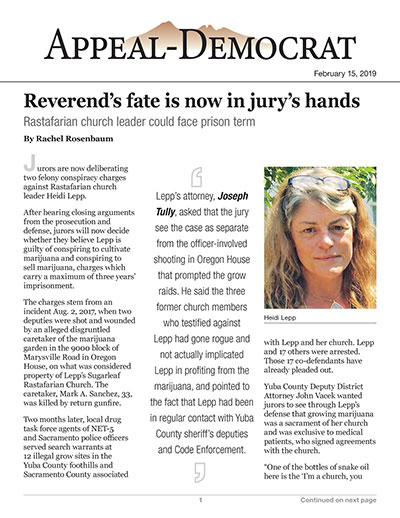 After hearing closing arguments from the prosecution and defense, jurors will now decide whether they believe Lepp is guilty of conspiring to cultivate marijuana and conspiring to sell marijuana, charges which carry a maximum of three years’ imprisonment.

The charges stem from an incident on Aug. 2, 2017, when two deputies were shot and wounded by an alleged disgruntled caretaker of the marijuana garden in the 9000 block of Marysville Road in Oregon House, on what was considered the property of Lepp’s Sugarleaf Rastafarian Church. The caretaker, Mark A. Sanchez, 33, was killed by return gunfire.

Yuba County Deputy District Attorney John Vacek wanted jurors to see through Lepp’s defense that growing marijuana was a sacrament of her church and was exclusive to medical patients, who signed agreements with the church.

“One of the bottles of snake oil here is the ‘I’m a church, you can’t touch me’ argument, which is completely invalid,” Vacek told jurors Friday. “That plan was to grow cannabis, to market it, and to not have police interference. That’s a conspiracy, plain and simple.”

Lepp’s attorney, Joseph Tully, asked that the jury see the case as separate from the officer-involved shooting in Oregon House that prompted the grow raids. He said the three former church members who testified against Lepp had gone rogue and not actually implicated Lepp in profiting from the marijuana, and pointed to the fact that Lepp had been in regular contact with Yuba County sheriff’s deputies and Code Enforcement.

He also asked the jury to consider the charges: that Lepp is charged with conspiracy, not simple cultivation or possession, and called the prosecution’s rude demeanor during trial as “eighth-grade behavior.”

Vacek said jurors had as long as they desired to deliberate Friday night, and if a verdict wasn’t reached they would return to court on Tuesday.