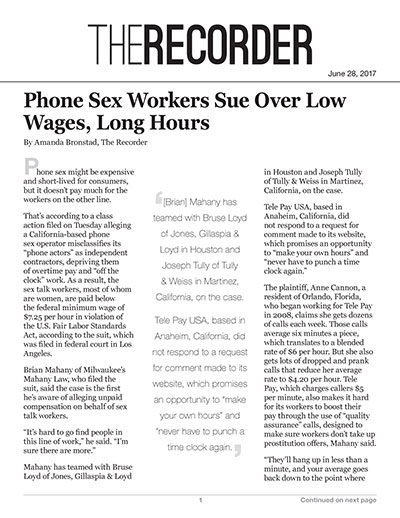 Phone sex might be expensive and short-lived for consumers, but it doesn’t pay much for the workers on the other line.

That’s according to a class action filed on Tuesday alleging a California-based phone sex operator misclassifies its “phone actors” as independent contractors, depriving them of overtime pay and “off the clock” work. As a result, the sex talk workers, most of whom are women, are paid below the federal minimum wage of $7.25 per hour in violation of the U.S. Fair Labor Standards Act, according to the suit, which was filed in federal court in Los Angeles.

Brian Mahany of Milwaukee’s Mahany Law, who filed the suit, said the case is the first he’s aware of alleging unpaid compensation on behalf of sex talk workers.

“It’s hard to go find people in this line of work,” he said. “I’m sure there are more.”

Mahany has teamed with Bruse Loyd of Jones, Gillaspia & Loyd in Houston, and Joseph Tully of Tully & Weiss in Martinez, California, on the case.

Tele Pay USA, based in Anaheim, California, did not respond to a request for comment made to its website, which promises an opportunity to “make your own hours” and “never have to punch a time clock again.”

The plaintiff, Anne Cannon, a resident of Orlando, Florida, who began working for Tele Pay in 2008, claims she gets dozens of calls each week. Those calls average six minutes apiece, which translates to a blended rate of $6 per hour. But she also gets lots of dropped and prank calls that reduce her average rate to $4.20 per hour. Tele Pay, which charges callers $5 per minute, also makes it hard for its workers to boost their pay through the use of “quality assurance” calls, designed to make sure workers don’t take up prostitution offers, Mahany said.

“They’ll hang up in less than a minute, and your average goes back down to the point where you’re getting 7 cents a minute,” he said.

The class, which Mahany estimated to be about 1,000 workers, involves all current and former “telephone actors” who worked for Tele Pay during the past three years but failed to earn minimum wage or get compensated for working more than 40 hours a week or “off the clock.”