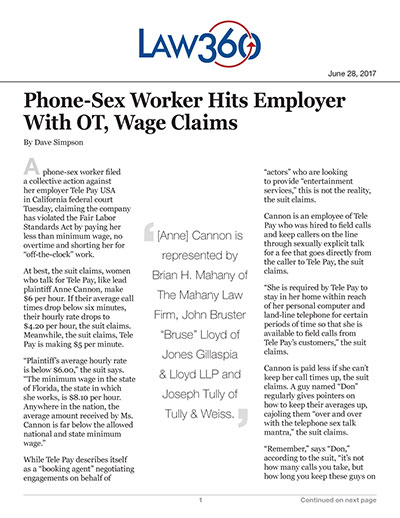 The fifth episode of the new season of “Serial,” aptly named “Pleas Baby Pleas,” focuses on prosecutors and the plea deals they make.

Prosecutors choose who to charge and for what crime and what a potential plea deal will be, Koenig notes.

“That’s the job we’ve given them,” she says. Then, Koenig cites a statistic: In 1974, there were 17,000 local prosecutors nationwide and about 300,000 felony prosecutions. By 2007, the number of prosecutors increased to 32,000 but the number of felony cases increased much more dramatically: to more than 3 million. Koenig states that the only way to deal with all the cases is with, well, deals.

The episode is subtitled “Don’t tell the judges, but the prosecutors have the most power in the building,” something Joseph Tully, a criminal lawyer from Martinez, California, told Oxygen.com says “any defense attorney in the country would tell you is no secret within the halls of the courthouse.”

The episode of the Cleveland-based season focuses on two cases: a fight on a city bus that turned fatal and a murder outside a club in the city’s west side.

After watching surveillance video and audio of the bus altercation that led up to the fatal shooting of Andrew Easley by Abdul Rahman, Koenig notes that Rahman was harrased by a young, unidentified man who was initially seated next to Rahman. Their argument continued when Rahman got up to stand from his seat, with the younger man provoking Rahman by slapping at the folded-up publication he was carrying. Other passengers, including Easely’s girlfriend, yell for them to quit arguing and get off the bus. Rahman does get off at the next stop, briefly, but then decides to get back on board.

At this point, the younger man implies that he might have a gun (although he doesn’t) and tells Rahman that he should get off with him at the next stop (as in, to settle their differences). After some further provocation, Rahman pulls out his own gun, which sends the other passengers into an uproar. When the bus makes its next stop, Easley’s girlfriend kicks Rahman in the butt, sending him off the bus, at which point Easley enters the picture. He follows Rahman off the bus and approaches him, but backs off when Rahman again waves the gun. Then someone on the bus claims Rahman only has a “water gun.” Easley and the young man who started the conflict then start to follow Rahman, who had started walking down the street. Then a gunshot rings out.

Koenig interviews prosecutor Brian Radigan, who deals mostly with homicide cases, for the episode regarding the Rahman shooting. The shooting could have been self-defense, but Radigan isn’t sure. Rahman, a former heavyweight fighter once dubbed “Ricardo Spain,” had even battled against Mike Tyson back in the 1980s. At one point during the altercation, he even appears to do a boxer’s shuffle. As Koenig notes, was a former fighter really scared of a younger person bothering him? And the person he shot wasn’t even the chief instigator.

“He could put murder on the proposed indictment and never mention the word self-defense but this one, he tells me, he really can see it, either way, crime or no crime,” she says.

Instead, he decides to show the grand jury all seven available camera angles of the incident, all the statements, and not only mention self-defense but explain the legal standards of self-defense as defined by the Ohio Supreme Court. Radigan leans more toward manslaughter than murder.

Koenig notes that the way he and other prosecutors frame the case does likely influence grand juries. So much so that defense attorneys Koenig speaks to off microphone tell her Radigan is merely showing off and that many defendants are indicted for murder with far less evidence.

“He’s putting on a show for you,” she said, relaying what the defense attorneys said. “People get indicted for stuff in 90 seconds, no discussion. They knew you were coming.”

In the end, the grand jury indicts Rahman on two charges of illegally possessing a weapon, because he has felony convictions from the 1970s. They rejected even manslaughter charges for the shooting. He spent just three months in jail, and a judge sentenced him to two years probation.

In the case of the club shooting, Dominique Williams was charged with killing Derrick Yanetta outside of M&M Saloon before firing at an off-duty police officer who had been working security at the club. The officer wasn’t hit, but he returned fire and ended up wounding Williams. Radigan and Williams’ defense attorney discuss a potential plea deal but then Radigan founds out a witness has come forward willing to testify against Williams, allowing him to push for a more severe sentence. But Williams doesn’t want any plea deal, instead opting to take his case to trial, where he’s convicted and sentenced to 35 years to life in prison.

In the end, Radigan and Koenig debate what can be considered a “fair” sentence in any plea deal.

“Fair is such a weird thing,” Koenig says, adding that it could depend on the age of the defendant.

Even though Radigan doesn’t do the sentencing, he does tee them up for the judges, Koenig said.

“We’re better off thinking of the victims here,” he said, adding that he doesn’t so much think about deterrence when considering a plea deal. “We don’t know if we ever deter people. We hope we do.”

Koenig says sentencing remains a “massive black hole” in our understanding of the justice system because there is no comprehensive data on sentencing.

“We don’t keep track,” she says, adding that Radigan doesn’t know if the plea deals he makes actually make Cleveland any safer.