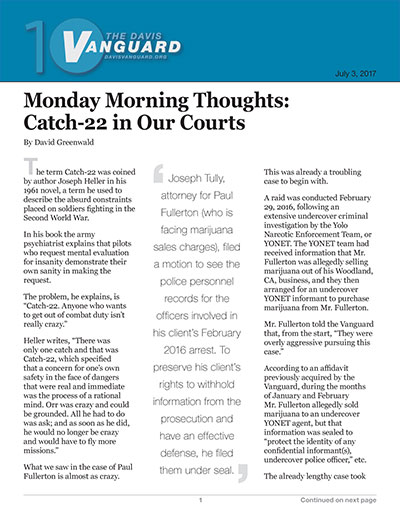 The term Catch-22 was coined by author Joseph Heller in his 1961 novel, a term he used to describe the absurd constraints placed on soldiers fighting in the Second World War.

In his book the army psychiatrist explains that pilots who request mental evaluation for insanity demonstrate their own sanity in making the request.

The problem, he explains, is “Catch-22. Anyone who wants to get out of combat duty isn’t really crazy.”

Heller writes, “There was only one catch and that was Catch-22, which specified that a concern for one’s own safety in the face of dangers that were real and immediate was the process of a rational mind. Orr was crazy and could be grounded. All he had to do was ask; and as soon as he did, he would no longer be crazy and would have to fly more missions.”

What we saw in the case of Paul Fullerton is almost as crazy.

This was already a troubling case to begin with.

A raid was conducted February 29, 2016, following an extensive undercover criminal investigation by the Yolo Narcotic Enforcement Team, or YONET. The YONET team had received information that Mr. Fullerton was allegedly selling marijuana out of his Woodland, CA, business, and they then arranged for an undercover YONET informant to purchase marijuana from Mr. Fullerton.

Mr. Fullerton told the Vanguard that, from the start, “They were overly aggressive pursuing this case.”

According to an affidavit previously acquired by the Vanguard, during the months of January and February Mr. Fullerton allegedly sold marijuana to an undercover YONET agent, but that information was sealed to “protect the identity of any confidential informant(s), undercover police officer,” etc.

The already lengthy case took another bizarre turn when Judge Timothy Fall at a May hearing denied a Pitchess motion, which included the sealed affidavit.

Joseph Tully, attorney for Paul Fullerton (who is facing marijuana sales charges), filed a motion to see the police personnel records for the officers involved in his client’s February 2016 arrest. To preserve his client’s rights to withhold information from the prosecution and have an effective defense, he filed them under seal.

Judge Timothy Fall, at a May hearing, denied the Pitchess motion because it did not specify officer conduct. Why? Because, as he admitted, he didn’t read the portions filed under seal.

Judge Fall then ruled, “The Court finds there is inadequate cause to go to an in-camera hearing on the… the Pitchess Motion in the Fullerton cases. And that is because even — as far as the unredacted portion goes, none of the officers are identified as having performed a specific act, except one who was mentioned in reference to a document.”

Judge Fall continued, “And without there being some notice of an act that is at issue, an officer did acts according to the report, type of thing, there’s absolutely no notice to anyone as to what is being sought, so – – or why it would be relevant.”

He said, “So the Pitchess Motion in the Fullerton cases, those are denied for inadequate basis to proceed.”

Of course the reason the defense filed it under seal was to preserve their evidence from the prosecution, not to prevent the judge from reading the material.  When the defense tried to point this out to the judge, the judge immediately shut him down, refused to allow him to object, and requested that he file a brief.

Judge Fall shut him down, saying that “you submitted the matter for decision.”

The Court explained that there was no procedural basis for stating an objection.  That the step here is to take a writ and file an appeal.

But it gets better – they file an appeal.

Mr. Tully argues, “If Judge Fall had read the unredacted declaration, he would have found that officers are identified as having performed specifics acts that provide a basis to proceed.”

The appeal was denied because “petitioner has failed to provide this court with an adequate record to review, i.e., the unredacted declaration filed under seal in respondent court, which the record suggests the court did in fact consider in ruling on the Pitchess motion.”

The problem, of course, as Mr. Tully explained to the Vanguard, is there is no way to file an appeal under seal through the mandatory electronic filing system.

This absurdity is costing the defendant vast quantities of money on attorney fees and dragging this case out. By the time it goes to prelim in late July, the case will be nearly 18 months old.

In the meantime, in two weeks this case goes to preliminary hearing and Mr. Tully is left to figure out how to get important information about the officer’s background in a case where, if there was ever a justification to grant a Pitchess motion, it would be this one.