MAN SAYS MPD TASED WITHOUT CAUSE 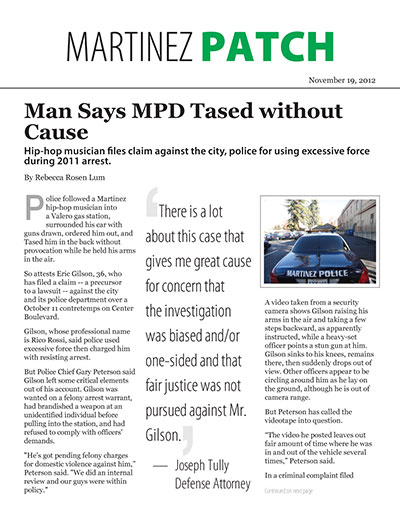 Police followed a Martinez hip-hop musician into a Valero gas station, surrounded his car with guns drawn, ordered him out, and Tased him in the back without provocation while he held his arms in the air.

So attests Eric Gilson, 36, who has filed a claim — a precursor to a lawsuit — against the city and its police department over a October 11 contretemps on Center Boulevard.

But Police Chief Gary Peterson said Gilson left some critical elements out of his account. Gilson was wanted on a felony arrest warrant, had brandished a weapon at an unidentified individual before pulling into the station, and had refused to comply with officers’ demands.

“He’s got pending felony charges for domestic violence against him,” Peterson said. “We did an internal review and our guys were within policy.”

A video taken from a security camera shows Gilson raising his arms in the air and taking a few steps backward, as apparently instructed, while a heavy-set officer points a stun gun at him. Gilson sinks to his knees, remains there, then suddenly drops out of view. Other officers appear to be circling around him as he lay on the ground, although he is out of camera range.

But Peterson has called the videotape into question.

“The video he posted leaves out fair amount of time where he was in and out of the vehicle several times,” Peterson said.

In a criminal complaint filed Aug. 1 Gilson is charged with two counts of stalking in violation of restraining order and one count each of battering, falsely imprisoning, making criminal threats and inflicting corporal injury to his estranged wife; child abuse and two misdemeanor counts of cruelty and child endangerment; and one felony count of first degree burglary of his family’s home on Dec. 29, 2011. His case is pending.

“I intend to vigorously defend Mr. Gilson against these charges,” said lawyer Joseph Tully in an email message. “The video, in terms of Mr. Gilson being Tasered in the back while he is on his knees with his hands up, speaks for itself and the charges submitted to the district attorney’s office were prepared and brought mostly by the same individuals involved in the Taser incident.

“There is a lot about this case that gives me great cause for concern that the investigation was biased and/or one-sided and that fair justice was not pursued against Mr. Gilson.”