LATEST ‘SERIAL’ EPISODE PROVES THAT FOR VICTIMS OF POLICE BRUTALITY, THE TRAUMA ENDURES 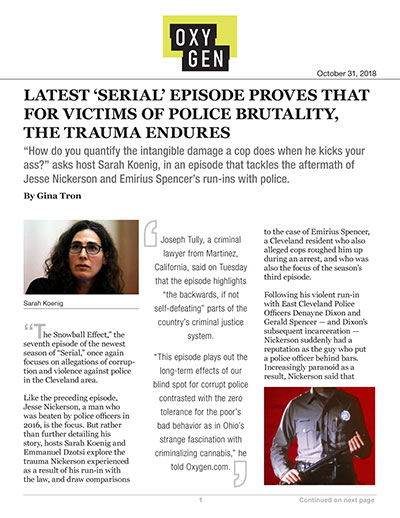 “HOW DO YOU QUANTIFY THE INTANGIBLE DAMAGE A COP DOES WHEN HE KICKS YOUR ASS?” ASKS HOST SARAH KOENIG, IN AN EPISODE THAT TACKLES THE AFTERMATH OF JESSE NICKERSON AND EMIRIUS SPENCER’S RUN-INS WITH POLICE.

“The Snowball Effect,” the seventh episode of the newest season of “Serial,” once again focuses on allegations of corruption and violence against police in the Cleveland area.

Like the preceding episode, Jesse Nickerson, a man who was beaten by police officers in 2016, is the focus. But rather than further detailing his story, hosts Sarah Koenig and Emmanuel Dzotsi explore the trauma Nickerson experienced as a result of his run-in with the law, and draw comparisons to the case of Emirius Spencer, a Cleveland resident who also alleged cops roughed him up during an arrest, and who was also the focus of the season’s third episode.

Following his violent run-in with East Cleveland Police Officers Denayne Dixon and Gerald Spencer — and Dixon’s subsequent incarceration — Nickerson suddenly had a reputation as the guy who put a police officer behind bars. Increasingly paranoid as a result, Nickerson said that he believes the incident was responsible for him experiencing more harassment from law enforcement.

The episode delves into Nickerson’s accumulating criminal charges that followed his high-profile run-in with police.

After spending two days in a makeshift holding cell where he was forced to urinate and defecate in a locker, Nickerson consulted with an attorney about potentially pursuing a case against the suburb of East Cleveland over the his beating by Officer Dixon. Instead, his lawyer thought it wiser to look into Nickerson’s July 2017 arrest at a block party.

However, it was Nickerson’s other legal troubles that presented obstacles to a suit against East Cleveland, namely a January 2017 incident in which Nickerson was pulled over in Euclid while on his way home from the hospital.

Prosecutors handed down eight misdemeanor and traffic charges related to the incident, and Nickerson eventually pleaded guilty to a marijuana drug abuse charge and driving with a suspended license. He was sentenced to five days in jail, 40 hours of community service and a $100 fine.

Dzotski noted that the judge in this case, former Euclid Municipal Court Judge Deborah LeBarron, was particularly hard on people over marijuana. But the judge also mentioned in the hearing reports of Nickerson’s rowdy and disrespectful attitude toward officers during the ordeal.

At this point, the episode circles back to Emirius Spencer, who tried to hold the two Euclid police police officers who beat him, including Officer Michael Amiott, accountable for their actions.

Back in the third episode of the season, civil rights attorney Paul Cristallo showed Koenig a video of Amiott allegedly using brutal force again: He was filmed punching a man during an arrest.

Despite Cristallo preparing to file a civil-rights case for Spencer, they had to settle for a plea deal since Euclid prosecutors continued to pursue charges against Spencer related to a 2017 marijuana violation.

Ultimately, Koenig explained, Spencer’s weed charge was trumped up, while the police use of force charge was played down.

In the end, Spencer was awarded $50,000 in damages, thanks to Cristallo.

Still, Spencer also endured a lot of emotional damage as a result.

“How do you quantify the intangible damage a cop does when he kicks your ass?” Koenig asks.

Joseph Tully, a criminal lawyer from Martinez, California, said on Tuesday that the episode highlights “the backwards, if not self-defeating” parts of the country’s criminal justice system.

“This episode plays out the long-term effects of our blind spot for corrupt police contrasted with the zero tolerance for the poor’s bad behavior as as Ohio’s strange fascination with criminalizing cannabis,” he told Oxygen.com.