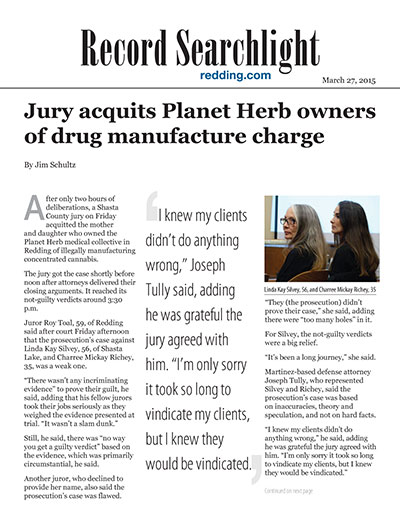 After only two hours of deliberations, a Shasta County jury on Friday acquitted the mother and daughter who owned the Planet Herb medical collective in Redding of illegally manufacturing concentrated cannabis.

The jury got the case shortly before noon after attorneys delivered their closing arguments. It reached its not-guilty verdicts around 3:30 p.m.

Juror Roy Toal, 59, of Redding said after court Friday afternoon that the prosecution’s case against Linda Kay Silvey, 56, of Shasta Lake, and Charree Mickay Richey, 35, was a weak one.

“There wasn’t any incriminating evidence” to prove their guilt, he said, adding that his fellow jurors took their jobs seriously as they weighed the evidence presented at trial. “It wasn’t a slam dunk.”

Still, he said, there was “no way you get a guilty verdict” based on the evidence, which was primarily circumstantial, he said.

Another juror, who declined to provide her name, also said the prosecution’s case was flawed.

“They (the prosecution) didn’t prove their case,” she said, adding there were “too many holes” in it.

For Silvey, the not-guilty verdicts were a big relief.

“It’s been a long journey,” she said.

Martinez-based defense attorney Joseph Tully, who represented Silvey and Richey, said the prosecution’s case was based on inaccuracies, theory and speculation, and not on hard facts.

“I knew my clients didn’t do anything wrong,” he said, adding he was grateful the jury agreed with him. “I’m only sorry it took so long to vindicate my clients, but I knew they would be vindicated.”

Now, he said, he would seek through civil court to have about $83,000 seized from Silvey and Richey during a law enforcement raid returned to them.

But that trial’s jury deadlocked on most of the counts in January, paving the way for the retrial, which got underway earlier this week.

The District Attorney’s Office, however, only retried the pair on the manufacture of a controlled substance count, which is not allowed under the Compassionate Use Act.

During closing arguments on Friday, Deputy District Attorney Emily Mees, who could not be reached for comment later Friday afternoon, said the two women were well aware that it’s illegal to manufacture a controlled substance.

“Medical marijuana is not a defense to producing concentrated cannabis by chemical extraction,” she said. “That’s illegal.”

Tully said Silvey and Richey did not manufacture concentrated cannabis and that the substances found in a trailer on Richey’s property was water-purified hashish. He said they were targeted by law enforcement and victimized by an overzealous prosecution because they owned the medical marijuana collective.

“Clearly, what’s going on here is (a) not guilty” verdict, he told jurors.

That illegal manufacture of a controlled substance charge came about as a result of a July 29 search of the trailer after a nine-month investigation by the Shasta County Interagency Narcotics Taskforce, or SINTF. That search uncovered what law enforcement and prosecutors called a concentrated cannabis processing lab.