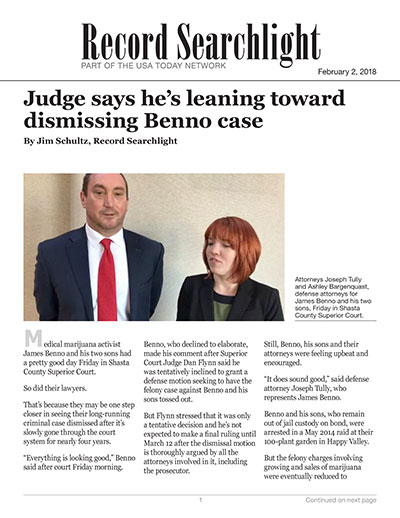 So did their lawyers.

That’s because they may be one step closer to seeing their long-running criminal case dismissed after it’s slowly gone through the court system for nearly four years.

“Everything is looking good,” Benno said after court Friday morning.

Benno, who declined to elaborate, made his comment after Superior Court Judge Dan Flynn said he was tentatively inclined to grant a defense motion seeking to have the felony case against Benno and his sons tossed out.

But Flynn stressed that it was only a tentative decision and he’s not expected to make a final ruling until March 12 after the dismissal motion is thoroughly argued by all the attorneys involved in it, including the prosecutor.

Still, Benno, his sons, and their attorneys were feeling upbeat and encouraged.

Benno and his sons, who remain out of jail custody on bond, were arrested in a May 2014 raid at their 100-plant garden in Happy Valley.

But the felony charges involving growing and sales of marijuana were eventually reduced to misdemeanors due to the passage of Proposition 64, which legalized recreational cannabis use.

In March a Shasta County jury acquitted three of 15 of 17 counts, including cultivation and the possession of marijuana for sale.

The DA’s Office later dismissed one of the two hung counts — conspiracy to manufacture a controlled substance — and retry them on a sole felony count of manufacturing concentrated cannabis.

In her motion to dismiss the felony count, however, defense attorney Ashley J. Bargenquast, who represents Logan Benno, says the prosecution on that criminal count should be under a Health and Safety code revolving around the cultivation and processing of marijuana.

But, she points out, such a prosecution would violate the Bennos’ double jeopardy rights, noting they were all acquitted of the charges applicable to that code section.

In her motion, Bargenquast says the DA’s current prosecution of the Bennos under a Health and Safety code section dealing with the manufacture of concentrated cannabis is deeply flawed, adding it would be a waste of time and taxpayer money for the prosecution to take it to trial. It was an issue in that code section over the definition of ethanol in connection with marijuana extraction that led the jury to hang on the manufacturing count, she said.

“This question ultimately boils down to whether ethanol is volatile or nonvolatile, which controls whether the use of it to create cannabis concentrates” violates that safety code section.

She noted, however, that the California Department of Public Health recently downgraded the definition of ethanol from volatile to nonvolatile.

Shasta County Chief Deputy District Attorney Ben Hanna could not be reached Friday afternoon for comment about the defense motion but has filed a prosecution motion opposing it.

Although Benno and his two sons had been scheduled to begin standing trial on the felony count, that trial date was postponed at the request of the defense attorneys.

If later tried and convicted of the felony count, Benno and his sons face a maximum punishment of seven years in jail. The criminal counts is not a prison-eligible offense.