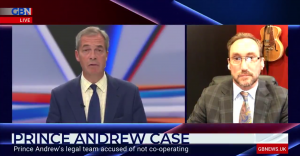 I was on UK news TV this week with host Nigel Farage discussing the hot legal news of the day. There are many similarities, but also stark differences between the UK and US legal systems. I don’t have to wear a wig in court, for example. Also, they spell Defense with as Defence, with a C. When there are major cases in the news in the UK, I am glad to offer expert legal analysis for our friends at GB News in London. GB News is a new news TV station in the UK, and it has made a big splash. With new presenter Nigel Farage hosting the evening timeslot, they are routinely beating both BBC and Sky News in the ratings.

Farage is a prominent British figure in both politics and media. Since the early 1990s, he campaigned for the United Kingdom’s withdrawal from the European Union, and was the leader of the Brexit Party. His politics have been described by Encyclopedia Britannica as “populist libertarian.” 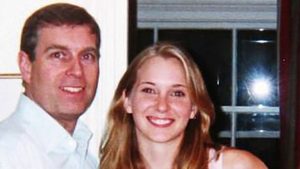 The hot news we discussed was the lawsuit filed by an American woman against the royal Prince Andrew. Virginia Giuffre, an alleged victim of Jeffery Epstein, filed a lawsuit against Prince Andrew alleging sexual abuse. Though this is a civil case, it stems from an alleged crime, and criminal law is my focus and specialty.

The lawsuit states, “Prince Andrew committed sexual assault and battery upon Plaintiff when she was 17 years old. As such, Prince Andrew is responsible for battery and intentional infliction of emotional distress pursuant to New York common law. The damage to Plaintiff has been severe and lasting.”

Watch my segment with Nigel on Twitter in the link below.

'He could never be deported…'

Joseph Tully, Criminal Defence Attorney, explains the details of the civil case that has been brought against Prince Andrew.

The Duke of York denies the allegations. pic.twitter.com/eP4B1YnZVP