IF THE GLOVE DON’T FIT 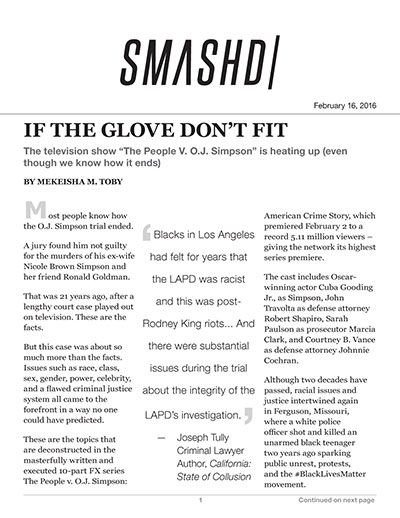 THE TELEVISION SHOW “THE PEOPLE V. O.J. SIMPSON” IS HEATING UP (EVEN THOUGH WE KNOW HOW IT ENDS)

Most people know how the O.J. Simpson trial ended.

A jury found him not guilty for the murders of his ex-wife Nicole Brown Simpson and her friend Ronald Goldman.

That was 21 years ago, after a lengthy court case played out on television. These are the facts.

But this case was about so much more than the facts. Issues such as race, class, sex, gender, power, celebrity, and a flawed criminal justice system all came to the forefront in a way no one could have predicted.

These are the topics that are deconstructed in the masterfully written and executed 10-part FX series The People v. O.J. Simpson: American Crime Story, which premiered February 2 to a record 5.11 million viewers – giving the network its highest series premiere.

“When people were discussing and debating the case 20 years ago, at the core of whether they believed in Simpson’s innocence or guilt was the issue of whether or not they believed in institutional racism within America’s police forces,” said Barna Donovan, a professor of communications at Saint Peter’s University in New Jersey.

“When it came to how people felt about the Simpson verdict, opinions fell along racial lines,” Donovan added. “Most whites thought Simpson was guilty and got away with it because he ‘played the race card,’ whereas a very large percentage of blacks said they were happy that he was acquitted – no matter his guilt or innocence – because it was a case of a black man beating a racist system.”

Executive producer Ryan Murphy, the other producers and the cast spoke to journalists at a recent Television Critics Association press panel in Pasadena, California., where most of them pointed out how current The People v. O.J. Simpson show feels today.

“I hope what people will take away from it is that we’re in this endless conversation,” said Brad Simpson of Boys Don’t Cry fame and one of the series’ executive producers. “Basically your experience of the criminal justice system and policing is very different based on the color of your skin and where you are economically.”

“People are always obsessed with true crime, and I think great true crime stories aren’t just about a crime,” Brad Simpson said. “They’re about some sort of rupture in a society. That’s the reason they fascinate us. But right now, I think people are interested in stories — between Serial and Making a Murderer, and us with O.J. — about the ways in which the justice system might be broken. People are interested in injustice right now, in a way that they haven’t always been.”

Another point, according to criminal lawyer Joseph Tully, is historical context. For instance, the O.J. Simpson case was a hotbed of controversy, in part, because it took place just two years after the L.A. riots.

“Blacks in Los Angeles had felt for years that the LAPD was racist and this was post-Rodney King riots,” said Tully, the author of the upcoming book California: State of Collusion, which spotlights misconduct in the state’s criminal justice system. “And there were substantial issues during the trial about the integrity of the LAPD’s investigation.”

Class and celebrity came into play, Tully argued, because it was widely perceived that Simpson bought his freedom by hiring a legal dream team.