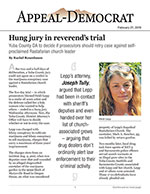 After two and a half days of deliberation, a Yuba County jury could not agree on a verdict in the marijuana conspiracy case against a Rastafarian church leader.

The five-day trial – in which prosecutors likened Heidi Lepp to a snake oil scam artist and the defense called her a holy woman who wanted to help others – ended in a hung jury Wednesday afternoon. Now, the Yuba County District Attorney’s Office will have to decide whether or not to retry the case.

The charges stem from an incident Aug. 2, 2017, when two deputies were shot and wounded by an alleged disgruntled caretaker of the marijuana garden in the 9000 block of Marysville Road in Oregon House, on what was considered property of Lepp’s Sugarleaf Rastafarian Church. The caretaker, Mark A. Sanchez, 33, was killed by return gunfire.

Deputy District Attorney John Vacek laid out a case that Lepp’s Rastafarian Church was a guise to make a profit off of cultivating and selling marijuana without law enforcement interference. Lepp’s attorney, Joseph Tully, argued that Lepp had been in contact with sheriff’s deputies and even handed over her list of church-associated grows – arguing that drug dealers don’t ordinarily alert law enforcement to their criminal activity.

“I am disappointed that the jury was unable to come to a unanimous verdict,” Curry wrote in an email Thursday. “I will be reviewing the case with the investigating officers and trial attorney over the coming weeks to decide if the case will be retried.”

Tully said a mistrial was a better outcome than a guilty plea, and said it was an important case to the cannabis community.

“Our plan is to proceed to jury trial and I’m very confident that I will be able to vindicate her the next time around,” Tully said in a phone interview Thursday. “I can make some adjustment and the DA can’t; they’ve played their hand.”

Lepp, 42, filed a lawsuit against Yuba County, Yuba County Sheriff’s Office, NET-5 and individual code enforcement officers in the eastern district of the U.S. District Court in June 2017, alleging that she and her followers were “victims of the ‘War on Drugs’ declared in 1971 by President Richard Nixon,” according to Appeal-Democrat archives, and that code enforcement used a neighboring property to spy on church members.

In an amended complaint, Lepp also named the Calaveras County Sheriff’s Office, Yolo County Sheriff’s Office and the chief of the state Bureau of Cannabis Control. Lepp is seeking $215 million in general damages, $420 million in special damages, and $710 million in punitive damages. She also asked that the court remove the $2 billion liens off Lepp’s bank account and a temporary restraining order against defendants seizing sacramental cannabis.

The next court hearing in the suit is scheduled for March 13.