GUN OWNER ‘STOOD HIS GROUND,’ JURY AGREES: SHOOTING TEEN WAS NOT A CRIME 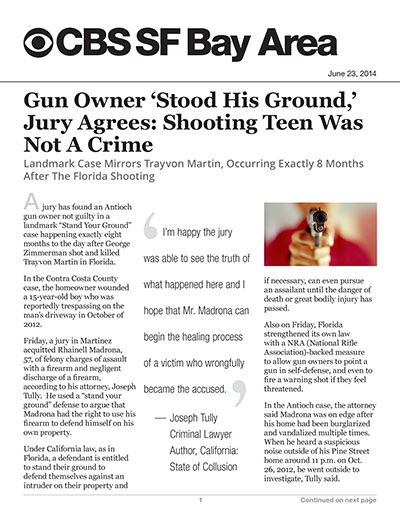 A jury has found an Antioch gun owner not guilty in a landmark “Stand Your Ground” case happening exactly eight months to the day after George Zimmerman shot and killed Trayvon Martin in Florida.

In the Contra Costa County case, the homeowner wounded a 15-year-old boy who was reportedly trespassing on the man’s driveway in October of 2012.

Friday, a jury in Martinez acquitted Rhainell Madrona, 57, of felony charges of assault with a firearm and negligent discharge of a firearm, according to his attorney, Joseph Tully.  He used a “stand your ground” defense to argue that Madrona had the right to use his firearm to defend himself on his own property.

Under California law, as in Florida, a defendant is entitled to stand their ground to defend themselves against an intruder on their property and if necessary, can even pursue an assailant until the danger of death or great bodily injury has passed.

Also on Friday, Florida strengthened its own law with a NRA (National Rifle Association)-backed measure to allow gun owners to point a gun in self-defense, and even to fire a warning shot if they feel threatened.

In the Antioch case, the attorney said Madrona was on edge after his home had been burglarized and vandalized multiple times. When he heard a suspicious noise outside of his Pine Street home around 11 p.m. on Oct. 26, 2012, he went outside to investigate, Tully said.

The defendant testified that when he exited his garage he saw two tall males dressed in black in his driveway.

His attorney said Madrona opted not to call 911, since he claimed Antioch police had been unresponsive to his calls in the past.

Instead, he armed himself with a gun and started to crawl under his garage door when he saw a teenage boy hoisting a garbage bin and charging at him, according to Tully.

The same garbage bin had been used to smash in Madrona’s car window three days earlier, the attorney said.

Tully said Madrona panicked, “…didn’t have time to think,” and fired his gun.

The teenage boy in the driveway suffered a grazing wound from the shooting, while the other two teens were uninjured.

According to Tully, Madrona shot his gun not only to defend himself but also to defend his wife, who was sleeping inside the house.

Tully said his client lost his longtime job at San Francisco International Airport after his arrest and is hoping to regain his former job now that he has been acquitted.

“I’m happy the jury was able to see the truth of what happened here and I hope that Mr. Madrona can begin the healing process of a victim who wrongfully became the accused,” the attorney said.

The prosecutor who tried the case was not immediately available for comment Monday.