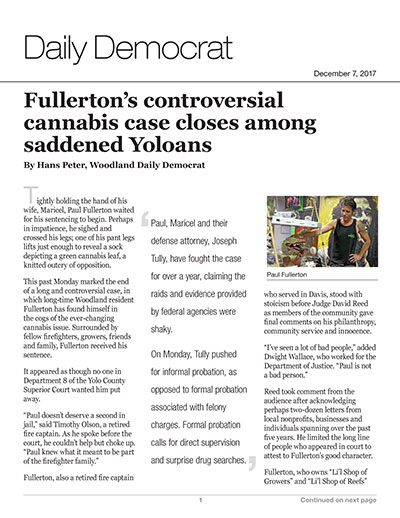 Tightly holding the hand of his wife, Maricel, Paul Fullerton waited for his sentencing to begin. Perhaps in impatience, he sighed and crossed his legs; one of his pant legs lifts just enough to reveal a sock depicting a green cannabis leaf, a knitted outcry of opposition.

This past Monday marked the end of a long and controversial case, in which long-time Woodland resident Fullerton has found himself in the cogs of the ever-changing cannabis issue. Surrounded by fellow firefighters, growers, friends, and family, Fullerton received his sentence.

It appeared as though no one in Department 8 of the Yolo County Superior Court wanted him put away.

“Paul doesn’t deserve a second in jail,” said Timothy Olson, a retired fire captain. As he spoke before the court, he couldn’t help but choke up. “Paul knew what it meant to be part of the firefighter family.”

Fullerton, also a retired fire captain who served in Davis, stood with stoicism before Judge David Reed as members of the community gave final comments on his philanthropy, community service, and innocence.

“I’ve seen a lot of bad people,” added Dwight Wallace, who worked for the Department of Justice. “Paul is not a bad person.”

Reed took comment from the audience after acknowledging perhaps two-dozen letters from local nonprofits, businesses, and individuals spanning over the past five years. He limited the long line of people who appeared in court to attest to Fullerton’s good character.

Fullerton, who owns “Li’l Shop of Growers” and “Li’l Shop of Reefs” in Woodland was convicted of selling cannabis illegally. At the time of his arrest in 2016 — after a controversial investigation — the charges against Fullerton were felony counts of illegal cultivation and possession for sale, along with possession of a firearm and an extended magazine.

The gun-related charges were dropped after the arms were proven legit, but the cannabis charges stayed, even as laws changed, making illegal sales a misdemeanor, not a felony.

Paul, Maricel, and their defense attorney, Joseph Tully, have fought the case for over a year, claiming the raids and evidence provided by federal agencies were shaky.

But the stack of letters and teary-eyed comments did little to sway Reed’s final sentencing: 90 days in jail, $2,000 in fines, and three years of formal probation.

The long case was closed, but the relief was equaled by disappointment. Maricel wept quietly as relatives consoled her. Firefighters embraced one another heartily. Paul Fullerton appeared deflated, his lean frame bent over as he signed paperwork.

It is likely that Fullerton will take a work project in place of any days in jail. And while Reed had to make the call, he closed the case with some assurance.

“I’m impressed with the things you have done in the past,” Reed said. “I hope you continue to do them.”