EAST BAY MAN NOT GUILTY IN ‘STAND YOUR GROUND’ SHOOTING 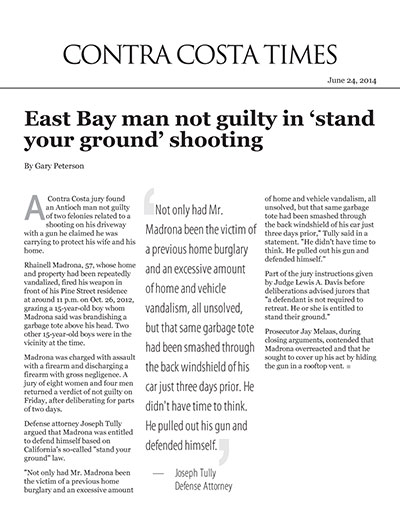 A Contra Costa jury found an Antioch man not guilty of two felonies related to a shooting on his driveway with a gun he claimed he was carrying to protect his wife and his home.

Rhainell Madrona, 57, whose home and property had been repeatedly vandalized, fired his weapon in front of his Pine Street residence at around 11 p.m. on Oct. 26, 2012, grazing a 15-year-old boy whom Madrona said was brandishing a garbage tote above his head. Two other 15-year-old boys were in the vicinity at the time.

Madrona was charged with assault with a firearm and discharging a firearm with gross negligence. A jury of eight women and four men returned a verdict of not guilty on Friday, after deliberating for parts of two days.

Defense attorney Joseph Tully argued that Madrona was entitled to defend himself based on California’s so-called “stand your ground” law.

“Not only had Mr. Madrona been the victim of a previous home burglary and an excessive amount of home and vehicle vandalism, all unsolved, but that same garbage tote had been smashed through the back windshield of his car just three days prior,” Tully said in a statement. “He didn’t have time to think. He pulled out his gun and defended himself.”

Part of the jury instructions given by Judge Lewis A. Davis before deliberations advised jurors that “a defendant is not required to retreat. He or she is entitled to stand their ground.”

Prosecutor Jay Melaas, during closing arguments, contended that Madrona overreacted and that he sought to cover up his act by hiding the gun in a rooftop vent.