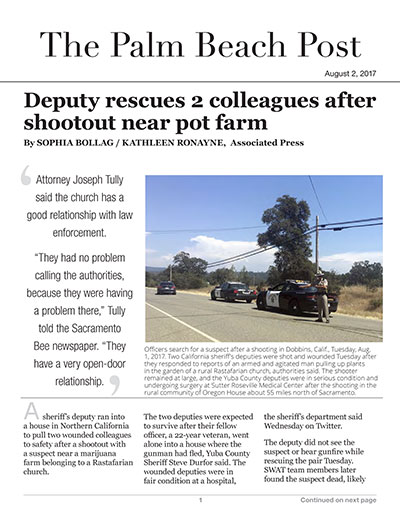 A sheriff’s deputy ran into a house in Northern California to pull two wounded colleagues to safety after a shootout with a suspect near a marijuana farm belonging to a Rastafarian church.

The two deputies were expected to survive after their fellow officer, a 22-year veteran, went alone into a house where the gunman had fled, Yuba County Sheriff Steve Durfor said. The wounded deputies were in fair condition at a hospital, the sheriff’s department said Wednesday on Twitter.

The deputy did not see the suspect or hear gunfire while rescuing the pair Tuesday. SWAT team members later found the suspect dead, likely from shots fired by the deputies, Durfor said, though it’s possible they were self-inflicted.

The suspect had been working for about a month at the farm owned by Sugarleaf Rastafarian Church, which believes that marijuana is sacred and grows it about 55 miles (88.5 kilometers) north of Sacramento.

The church’s leader, Heidi Lepp, said she received a call from members who worked on the farm saying the man, who she knew only as “Sawyer,” was ripping up plants and wielding a gun. She told the workers to leave and called authorities.

When the deputies arrived, the suspect fled about 100 yards (91.4 meters) up a hill toward homes on the property. A woman gave the deputies permission to enter her home, and the man opened fire when they entered. The deputies shot back.

The third deputy, who had taken a position at the back door, then ran inside to get his colleagues.

Authorities have not identified the suspect or any of the officers.

The sheriff said the wounded deputies, one of who has been with the department for 14 years and the other for 10, were airlifted to a hospital and arrived “conscious, talkative and stable.” They underwent surgery.

Lepp said a branch of her church owns the property. It does not have a permit to grow medical marijuana in Yuba County.

Her attorney, Joseph Tully, said the church has a good relationship with law enforcement.

“They had no problem calling the authorities, because they were having a problem there,” Tully told the Sacramento Bee newspaper. “They have a very open-door relationship.”