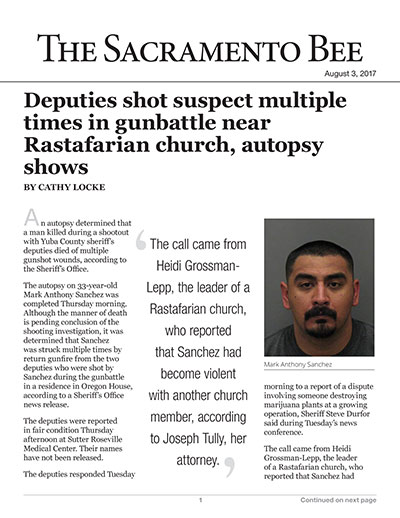 An autopsy determined that a man killed during a shootout with Yuba County sheriff’s deputies died of multiple gunshot wounds, according to the Sheriff’s Office.

The autopsy on 33-year-old Mark Anthony Sanchez was completed Thursday morning. Although the manner of death is pending the conclusion of the shooting investigation, it was determined that Sanchez was struck multiple times by return gunfire from the two deputies who were shot by Sanchez during the gunbattle in a residence in Oregon House, according to a Sheriff’s Office news release.

The deputies were reported in fair condition Thursday afternoon at Sutter Roseville Medical Center. Their names have not been released.

The deputies responded Tuesday morning to a report of a dispute involving someone destroying marijuana plants at a growing operation, Sheriff Steve Durfor said during Tuesday’s news conference.

The call came from Heidi Grossman-Lepp, the leader of a Rastafarian church, who reported that Sanchez had become violent with another church member, according to Joseph Tully, her attorney.

Sanchez was believed to be living and working as a caretaker at the marijuana garden in exchange for room and board and nominal wages, according to a Sheriff’s Office news release.

When deputies arrived in the 900 block of Marysville Road, they chased Sanchez to a nearby home. Sanchez fired at the deputies inside the home and the deputies returned fire, Durfor said.

A third deputy pulled the injured deputies out of the house.

Additional officers arrived and no one came out of the house when they fired tear gas into the residence. A remote-controlled robot with a camera determined that Sanchez was dead.