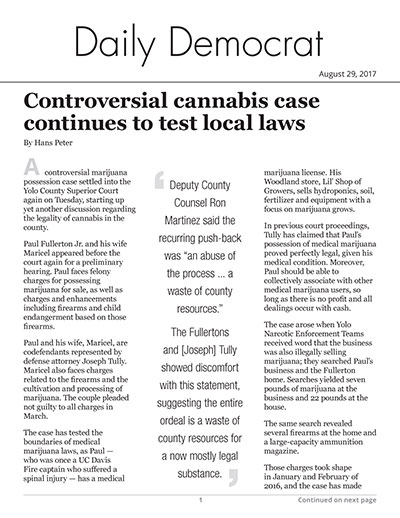 A controversial marijuana possession case settled into the Yolo County Superior Court again on Tuesday, starting up yet another discussion regarding the legality of cannabis in the county.

Paul Fullerton Jr. and his wife Maricel appeared before the court again for a preliminary hearing. Paul faces felony charges for possessing marijuana for sale, as well as charges and enhancements including firearms and child endangerment based on those firearms.

Paul and his wife, Maricel, are codefendants represented by defense attorney Joseph Tully. Maricel also faces charges related to firearms and the cultivation and processing of marijuana. The couple pleaded not guilty to all charges in March.

The case has tested the boundaries of medical marijuana laws, as Paul — who was once a UC Davis Fire captain who suffered a spinal injury — has a medical marijuana license. His Woodland store, Lil’ Shop of Growers, sells hydroponics, soil, fertilizer, and equipment with a focus on marijuana grows.

In previous court proceedings, Tully has claimed that Paul’s possession of medical marijuana proved perfectly legal, given his medical condition. Moreover, Paul should be able to collectively associate with other medical marijuana users, so long as there is no profit and all dealings occur with cash.

The case arose when Yolo Narcotic Enforcement Teams received word that the business was also illegally selling marijuana; they searched Paul’s business and the Fullerton home. Searches yielded seven pounds of marijuana at the business and 22 pounds at the house.

The same search revealed several firearms at the home and a large-capacity ammunition magazine.

Those charges took shape in January and February of 2016, and the case has made little progress since then. This came to attention in Tuesday’s hearing when Deputy County Counsel Ron Martinez said the recurring push-back was “an abuse of the process … a waste of county resources.”

The Fullertons and Tully showed discomfort with this statement, suggesting the entire ordeal is a waste of county resources for a now mostly legal substance.

And since the case has begun, the cannabis industry has advanced toward legality. With recreational use to be completely legal on Jan. 1, 2018, the charges against the couple seem to have shrunk in severity.

Yolo County’s interim law allows individuals the ability to cultivate and process no more than six cannabis plants for personal recreational use, so long as they do not sell them for profit. Further cultivation falls subject to zoning laws and must adhere to fees and permits.

In previous hearings, Tully said in The firearms found on the property were all legally owned, and the high-capacity clips were owned before a 2014 law prohibited them. Also, both the guns and the cannabis were not accessible by any child.

The case was once again pushed back, this time to Sept. 24.