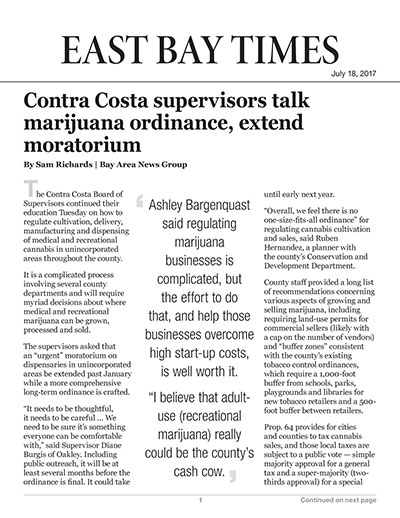 The Contra Costa Board of Supervisors continued their education Tuesday on how to regulate cultivation, delivery, manufacturing, and dispensing of medical and recreational cannabis in unincorporated areas throughout the county.

It is a complicated process involving several county departments and will require myriad decisions about where medical and recreational marijuana can be grown, processed, and sold.

The supervisors asked that an “urgent” moratorium on dispensaries in unincorporated areas be extended past January while a more comprehensive long-term ordinance is crafted.

“It needs to be thoughtful, it needs to be careful … We need to be sure it’s something everyone can be comfortable with,” said Supervisor Diane Burgis of Oakley. Including public outreach, it will be at least several months before the ordinance is final. It could take until early next year.

“Overall, we feel there is no one-size-fits-all ordinance” for regulating cannabis cultivation and sales, said Ruben Hernandez, a planner with the county’s Conservation and Development Department.

County staff provided a long list of recommendations concerning various aspects of growing and selling marijuana, including requiring land-use permits for commercial sellers (likely with a cap on the number of vendors) and “buffer zones” consistent with the county’s existing tobacco control ordinances, which require a 1,000-foot buffer from schools, parks, playgrounds and libraries for new tobacco retailers and a 500-foot buffer between retailers.

Prop. 64 provides for cities and counties to tax cannabis sales, and those local taxes are subject to a public vote — simple majority approval for a general tax and a super-majority (two-thirds approval) for a special tax. A statewide 15 percent excise tax will is imposed on pot sales as required under Prop. 64, but medical cannabis is exempt from standard sales and use taxes, typically 7.5 to 10 percent.

Marijuana taxes should not be so high as to encourage a black market, several officials said Tuesday, but Supervisor John Gioia of Richmond said taxes should be high enough to pay for the expenses of regulation.

Martinez-based attorney Ashley Bargenquast said regulating marijuana businesses is complicated, but the effort to do that, and help those businesses overcome high start-up costs, is well worth it.

“I believe that adult-use (recreational marijuana) really could be the county’s cash cow,” she said.

Supervisor Karen Mitchoff of Concord scoffed at the “cash cow” label but said the county needs to get the taxation-costs balance right. “I want to get as much money from anything we do as possible,” Mitchoff said.

The supervisors said they want to see a draft ordinance before the end of the year.