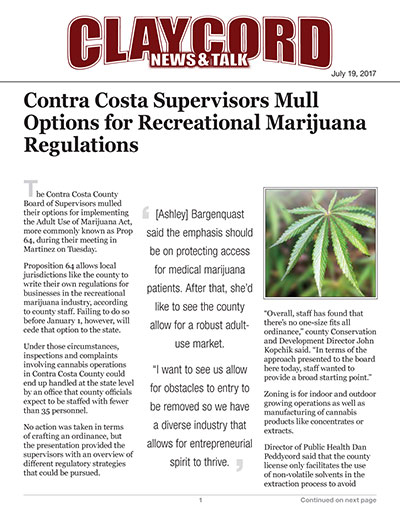 The Contra Costa County Board of Supervisors mulled their options for implementing the Adult Use of Marijuana Act, more commonly known as Prop 64, during their meeting in Martinez on Tuesday.

Proposition 64 allows local jurisdictions like the county to write their own regulations for businesses in the recreational marijuana industry, according to county staff. Failing to do so before January 1, however, will cede that option to the state.

Under those circumstances, inspections and complaints involving cannabis operations in Contra Costa County could end up handled at the state level by an office that county officials expect to be staffed with fewer than 35 personnel.

No action was taken in terms of crafting an ordinance, but the presentation provided the supervisors with an overview of different regulatory strategies that could be pursued.

“Overall, the staff has found that there’s no one-size-fits-all ordinance,” county Conservation and Development Director John Kopchik said. “In terms of the approach presented to the board here today, staff wanted to provide a broad starting point.”

Zoning is for indoor and outdoor growing operations as well as the manufacturing of cannabis products like concentrates or extracts.

Director of Public Health Dan Peddycord said that the county license only facilitates the use of non-volatile solvents in the extraction process to avoid public safety hazards like the explosions commonly associated with butane hash oil labs. He also raised questions about the chemical content of cannabis products manufactured with volatile solvents.

Other uses like dispensaries or delivery services could also be licensed, and there was discussion of using that process as a way of limiting or “capping” the number of such operations to be allowed.

There was some consideration of buffers to keep commercial cannabis activities from taking place too close to “sensitive” sites like schools, playgrounds, parks, libraries, and drug treatment centers as well as residential zoning districts.

One proposal entailed a 2,000-foot buffer for schools, parks, and playgrounds with just 1,000 feet for residential areas. Another called for buffers of 1,000 feet and 500 feet, respectively.

After adjourning for lunch, County Administrator David Twa addressed the matter of taxation and revenue.

“Generally there is an appearance that people overestimate the tax revenue and underestimate the cost of all the services necessary to provide the regulation,” Twa said.

Due to federal prohibitions preventing banks from doing business with dispensaries, the marijuana business tends to be largely cash-based, according to Twa, who cited anecdotal evidence about cannabis entrepreneurs paying their taxes with “hundreds of thousands of dollars in cash.”

In the end, taxes on the cannabis industry should not be high enough to create an incentive to keep doing business on the black market, Twa said.

“What I’m concerned about is that they’re going to put arbitrary caps and make entry into the cannabis industry in Contra Costa County just too high,” said Ashley Bargenquast in an interview after the meeting.

Bargenquast, from Tully and Weiss Attorneys at Law, spoke during public comment, citing recent news of a marijuana shortage in Nevada and the potential challenges of bringing California’s first crop of legal marijuana to the recreational market.

Even after cannabis suppliers are licensed to operate in early 2018, it could take six months or more to begin retail sales.

First and foremost, Bargenquast said the emphasis should be on protecting access for medical marijuana patients. After that, she’d like to see the county allow for a robust adult-use market.

“I want to see us allow for obstacles to entry to be removed so we have a diverse industry that allows for entrepreneurial spirit to thrive,” Bargenquast said.