CLOSING ARGUMENTS IN THE MARIJUANA CONSPIRACY CASE OF HEIDI LEPP 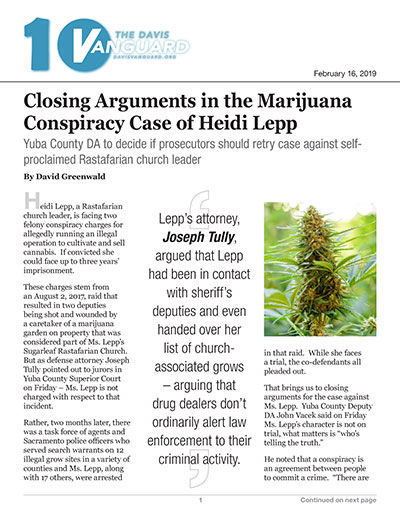 Heidi Lepp, a Rastafarian church leader, is facing two felony conspiracy charges for allegedly running an illegal operation to cultivate and sell cannabis.  If convicted she could face up to three years’ imprisonment.

These charges stem from an August 2, 2017, raid that resulted in two deputies being shot and wounded by a caretaker of a marijuana garden on property that was considered part of Ms. Lepp’s Sugarleaf Rastafarian Church.  But as defense attorney Joseph Tully pointed out to jurors in Yuba County Superior Court on Friday – Ms. Lepp is not charged with respect to that incident.

Rather, two months later, there was a task force of agents and Sacramento police officers who served search warrants on 12 illegal grow sites in a variety of counties and Ms. Lepp, along with 17 others, were arrested in that raid.  While she faces a trial, the co-defendants all pleaded out.

That brings us to closing arguments for the case against Ms. Lepp.  Yuba County Deputy DA John Vacek said on Friday Ms. Lepp’s character is not on trial, what matters is “who’s telling the truth.”

He noted that a conspiracy is an agreement between people to commit a crime.  “There are no thought crimes,” he told the jury.  Instead it requires overt acts to put the plan into motion.  He said they are only required to show one overt act, but in this case they have identified 24 overt acts.

“In this case we clearly have an agreement among various people and various parties to grow and market marijuana,” Mr. Vacek argued to the jury.  He said we know that because Ms. Lepp memorialized it in the binders that she developed – the defense claimed as part of her collective.

The prosecutor claimed these were agreements between Ms. Lepp through her church and various growers.  “They are clearly an agreement,” he stated.  “On the face of it, that looks like it might not be legal.”

Mr. Vacek noted that the defendant raises two defenses to these charges – one is the mistake of law defense and the other is that she has a legal collective.

Mr. Vacek noted that because conspiracy requires a specific intent to commit a crime, “it is potentially a defense if the person in good faith thought they were in compliance with the law.”

Her defense, he said, is “I am a church, and being such exempts me from the normal criminal laws in the state of California.”  The issue he told the jury is whether she honestly and in good faith believes this to be the law.

“I would submit to you that that claim is completely bogus,” he argued.  “She admitted such during her testimony.”

He pointed out there her husband, Eddie Lepp, served eight and a half years on marijuana charges, raised this very issue in his defense, took that issue to an appellate court and was denied.  Mr. Vacek argued that Ms. Lepp “knew that this defense didn’t fly, that was not the law.”

“I submit that the religious defense here is just nonsense,” he said.

Mr. Vacek argued that even Mr. Tully recognizes that this defense is bogus and so he claimed he created a new defense – that this was a legal collective.

“All along when she was talking to Sgt. Speer, the defense was religious defense,” he said.  “We have to look at that.  Is it a valid collective?”

Sgt. Speer was the expert witness in this case, “he offered an opinion that no, this was not a valid collective,” Mr. Vacek argued.

“Heidi Lepp said I am not a collective,” Mr. Vacek pointed out from a recorded August 2017 phone call.  “She had been a collective, but was now a church.”

He explained the growers believed that by having the binder, they would have some kind of legal protection from prosecution. They were experienced growers, they knew what they doing, they made good product, he said.

Sgt. Speer testified that “this was marijuana in excess of reasonable medical needs.”  He also testified “that Ms. Lepp had a significant profit motive.

“The cultivators acknowledged a profit motive in doing what they were doing,” he argued.  The cultivators also acknowledged, he claimed, that their product would be on the black market.  Some of it would go out of state in violation of state laws on legal grows and collectives.

He said that in her conversations with Sgt. Speer she acknowledged that product was going out of state, but that it was okay if it was going church to church.  “Well, that’s not okay,” he told the jury.

Joseph Tully, representing Ms. Lepp, argued that what happened here is that nothing linked Ms. Lepp to criminal acts, instead what you had was three of the growers simply went rogue.  They got involved in illegal activity which led Ms. Lepp to kick them out of the church.

He argued that the prosecutor here didn’t follow the law on cannabis.  “If you’re going to do a cannabis case, the first thing you should do is look at the law on collectives,” Mr. Tully argued.  He argued these activities are lawful “provided you have qualified patients.”  And provided it’s not for profit.

He noted that the law requires that qualified patients “associate” in the state of California.

He said, given she had 160 churches, how easy it would have been for one person to come forward and say “Ms. Lepp and I were planning to move this to another state.”

Three people said that was against the rules laid out in the binder, “and Ms. Lepp wasn’t involved.”

He argued that Ms. Lepp was only responsible for her own actions, what she herself was planning and intending to do.  Her binder was intended to make sure everyone was in compliance with the law.

He explained that the testimony from the officers involved was that they served the search warrant, saw plants, cut them down, arrested people and took money.  “That’s the prosecution’s case – there’s nothing linking Ms. Lepp to any criminal activity,” he argued.

“This case is about Ms. Lepp,” Mr. Tully argued.

Mr. Tully references the video and points out that she had been talking to code enforcement and the sheriff, in belief that what she was doing was in compliance with state law.  “That is someone who believes in what they’re doing,” he argued.

For a conspiracy, Mr. Tully argued, “The standard is whether she believes it.

“Because the prosecution chose to do conspiracy, there is a defense to the specific intent – that is a good faith belief,” Mr. Tully argued.  “Honesty of purpose.

Mr. Tully’s main defense was that this was a legal collective and she was following the law.

Mr. Tully pointed out that Sgt. Speer did not follow the law and he also didn’t know the law.  “You don’t have to know you’re in a collective, you don’t have to say you’re in a collective,” he stated.  “You only have to act as a qualified patient in the state of California associating with other qualified patients and not make a profit.  That’s the law.”

Mr. Tully also argued that Sgt. Speer failed to follow the law in terms of collecting photographic evidence that showed and reasonably depicted the size and scale of the operation.

“They did not do this,” he said.  “They did not take pictures that give us a view of the entirety of the garden.”

They have to take the told weight and submit it to the judge, he said.  “There is no evidence that they did that.

“They didn’t do it and because they didn’t do it, we can’t test what’s  there,” he said.  “If the government isn’t following the law, the jury has to hold them accountable.”

Mr. Tully also noted that this was a formal organization.  It was filed with the state.  They had state documents and a tax ID.  They filed incorporation with the Secretary of State.  They had weekly meetings, the binder – if they complied with it, they would be in compliance with state law.

Moreover, there was no evidence that she was making money off this.  She was caught with $200 in cash and a negative $400 balance on her bank account.  He argued that was not evidence she was making a profit.

He pointed out she was driving a 20-year-old car.

From the law, he said, “There is no limit on the number of persons who can be members of a collective.”  Not every member must be part of the cultivation process, he says, “it is enough that a member provides some sort of financial support by purchasing marijuana from the collective.”

He pointed out examples where the officers and even the prosecutors did not know the law.

“If you’re going to be participating in the case, you should know the law,” he said.  “That officer didn’t have any idea that this is the law.”  He added, “The prosecution team did not know the law on cannabis.”

Joseph Tully pointed out that, given the number of patients in this collective, the amount of plants was not unreasonable.  He estimated previously that there may have been as many as 50,000 patients, but he said even if that number is really 1000 patients, that’s only 1.5 plants for person and the law provides for up to six.

He asked if there was one person who said that Heidi Lepp was giving cannabis to a non-patient.  “Not one person, not one bit of evidence.

“Everything in her binder mirrors the collective law,” he said.  There was “nothing connecting Ms. Lepp at any point in time to cannabis leaving the state of California.”

He finally pointed out that they seized her computers.  He said, if she was a drug dealer, where are the texts and emails showing that activity?  He argued that the prosecutors introduced nothing, not one bit of illegal activity.

In his brief rebuttal he said, “What I want the jury to think about is what is the conspiracy in this case, who are our conspirators?”  He said, “The conspirators in this case were the 17 other people in Yuba County.”

Mr. Tully characterizes three of those as “rogue.”  He then shows quotes from various growers who said that “we’re going to make big money and we will sell it to whoever we want to sell it to.”

“That’s what they were doing,” he said.  “The conspiracy is that she was selling a worthless product – the binder here – with the promise that this would keep them out of trouble.  That’s it.  She sold them a bill of goods.

“When the rubber hit the road, it was the Heidi show,” he said.

He argued that this conspiracy was about making money, but he pointed out it doesn’t matter that “Heidi turns out to be a lousy business woman” and didn’t make money herself – the group was organized in order to illegally make money.

The jury will return on Tuesday and begin their deliberations.