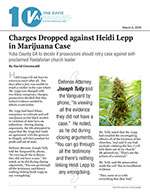 Heidi Lepp will not have to return to court after all.  Ten days after a jury was unable to reach a verdict in the case where Ms. Lepp was charged with two felony conspiracy charges, prosecutors decided that they lacked the evidence needed to obtain a conviction.

Ms. Lepp had faced felony conspiracy to cultivate and sell marijuana on the black market in violation of state laws on collectives.  During closing arguments, the DA attempted to argue that Ms. Lepp had made an agreement with the growers to illegally sell their product for profit and out of state.

Defense Attorney Joseph Tully told the Vanguard by phone, “In viewing all the evidence they did not have a case.”  He noted as he did during closing arguments, “You can go through all the testimony and there’s nothing linking Heidi Lepp to any wrongdoing.”

Mr. Tully noted that Ms. Lepp had emailed the investigating officers all of the locations of her churches, “and said if you find anybody violating the law, I will kick them out of my church.”  He pointed out, “That’s not the actions of a criminal.”

Mr. Tully said the prosecution made the call “due to insufficient evidence.

“They came at us with everything that they had,” he explained.  “Under the best conditions, them having everything.  Us being behind the eight-ball.  I had had the case for four months.  The DA had had it for a year and a half.  They had everything going for them.

“Heidi Lepp was indigent and we couldn’t afford to hire an expert,” he added.  “So we didn’t have an expert testifying on our side.”

He believed that had the case proceeded, he would have been able to make adjustments and “they couldn’t have.  They were locked in on the record.  Their investigators already testified under oath to what they investigated.  There was nothing linking Heidi Lepp to criminal activity or even knowledge of criminal activity.”

For Mr. Tully, a big takeaway is: “Law enforcement doesn’t know the law on cannabis.  They wasted a lot of taxpayers’ money because they didn’t like what she was doing.”

The jury hung 7-5 in the conspiracy case against Heidi Lepp, charged with conspiracy to illegally cultivate and sell cannabis.  The Yuba County jury heard closing arguments last Friday, but this week could not reach a unanimous verdict and so Ms. Lepp will come back on April 4 for a hearing in Marysville before a scheduled second trial on April 17 – if it gets that far.

“I look at this as step one in completely vindicating Heidi (Lepp),” her attorney Joseph Tully told the Vanguard.  “I think that this case was almost ideal conditions for the prosecutor and they couldn’t convict her.”

He believes with more time and some adjustments on their part, “I don’t see any way that the prosecutor can convict her.”

During closing arguments, the DA attempted to argue that Ms. Lepp had made an agreement with the growers to illegally sell their product for profit and out of state, both in violation of laws on collectives.

But Mr. Tully countered that on the day that she was arrested, she had $200 in her pocket and a negative $400 balance in her bank account.

Moreover, in a conspiracy, the prosecutor had to show not only that she broke the law, but that she intended to break the law.  Mr. Tully argued there was no evidence that Ms. Lepp instructed or directed any of the growers – some of whom did in fact sell a product for profit and out of state – or even knew of it.

A key factor in the jury hanging, though, was an issue from the August 2, 2017, raid that resulted in two deputies being shot and wounded by a caretaker of a marijuana garden on property that was considered part of Ms. Lepp’s Sugarleaf Rastafarian Church.

Even though Mr. Tully argued during closing statements that Ms. Lepp was not being charged with respect to that incident, he told the Vanguard on Thursday that he believes some of the jurors held her accountable for it.

Some of the jurors trying to convict her were reading the jury instructions incorrectly, Mr. Tully explained.  “They believed that just because some of the people that were part of Heidi’s church were bad actors, that that meant that Heidi was responsible.”

He said, “That’s not how the law works.”

There were two issues that the jury seemed to be stuck on.  One was whether Ms. Lepp could be responsible for the unilateral actions of her church members.

Joseph Tully explained, “The law doesn’t work like that.  You have to knowingly participate in crime in order to be convicted of it.”

The second issue was Sgt. Speer testified that Ms. Lepp said, “I’m not a collective, we’re a church now.”

Mr. Tully explained, “That’s not how the law works either.  Being a collective is about the actions that you do, it’s not about the words that you say.”

In order to convict her on the crime of conspiracy, the DA acknowledged that there had to be an agreement between people to commit a crime and that agreement then needs an overt act to put the plan into motion.  He said they are only required to show one overt act, but in this case, they have identified 24 overt acts.

But Mr. Tully argued that Mr. Vacek, the prosecutor, never specifically tied Ms. Lepp to any overt act.

He said, “There is no connection” between Ms. Lepp and the growers who violated state law.  He explained, “Her church regulations were that you had to follow the California collective law.”

He added, “She had written an email to Sgt. Speer saying here are my church locations, if you find anybody violating the law I will kick them out of my church.”

He stated, “Being open with law enforcement I guess gets you raided and financially ruined and almost imprisoned.”

Mr. Tully during closing arguments criticized the prosecution and police for not knowing the law on collectives.

“If you’re going to do a cannabis case, the first thing you should do is look at the law on collectives,” Mr. Tully told the church.

However, as he told the Vanguard, “It’s doesn’t matter that they don’t know the law because still, half the jury didn’t care.”

“That’s what they were doing,” he said. “The conspiracy is that she was selling a worthless product – the binder here – with the promise that this would keep them out of trouble. That’s it. She sold them a bill of goods.

“When the rubber hit the road, it was the Heidi show,” he said.

“Their theory boiled down to Heidi convincing people to join her church and in those binders, she was coaching them on how to follow the law pertaining to California collective.  Because some people were bad actors, (the prosecutor) said she was enabling them.  And because she was enabling them, (the prosecutor) argued that she was criminally liable.

This is a classic case of felony conspiracy to commit a misdemeanor.  Conspiracy is a wobbler under California law and can be charged as either a misdemeanor or a felony.

“Cultivation and sale are misdemeanors after Prop. 64,” Mr. Tully explained.  “Rather than charging her with two misdemeanors, they charged her with conspiracy to commit a misdemeanor as a felony.”

He added, “They were coming after her with both guns blazing.”

But the bigger point here is that “there was no evidence that she had done anything wrong.”  In fact, he argued, “all the evidence was that she was following the law.”

Now the question is whether this case will be re-tried.  Mr. Tully said that the judge advised the prosecution not to re-try the case.  Mr. Vacek has retired, effective at the end of the trial, so if it is re-tried there will be a new deputy DA.

We will find out more on April 4 when the case comes back to Yuba County Superior Court.