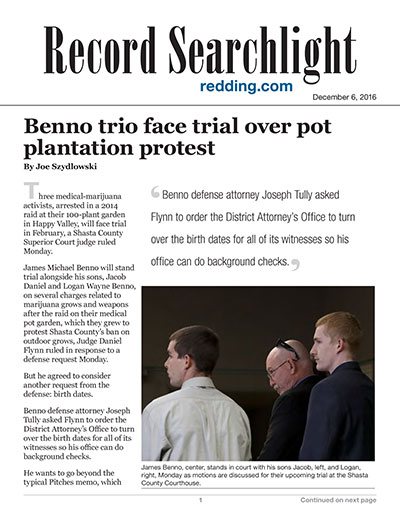 James Michael Benno will stand trial alongside his sons, Jacob Daniel and Logan Wayne Benno, on several charges related to marijuana grows and weapons after the raid on their medical pot garden, which they grew to protest Shasta County’s ban on outdoor grows, Judge Daniel Flynn ruled in response to a defense request Monday.

But he agreed to consider another request from the defense: birth dates.

Benno defense attorney Joseph Tully asked Flynn to order the District Attorney’s Office to turn over the birth dates for all of its witnesses so his office can do background checks.

He wants to go beyond the typical Pitches memo, which identifies any official complaints against law enforcement officers called to testify.

“Pitches information revolves around the 40 hours (on the job),” he said. “(There are) 128 hours unaccounted for.”

Shasta County Deputy District Attorney Ben Hannah opposed it, however, arguing Tully’s request is beyond typical information requests and already was fulfilled with the Pitchess process.

But other witnesses have to provide that information, Tully said. Both said they didn’t think they could resolve the issue.

However, the felony charges involving growing and sales of marijuana will be reduced to misdemeanors thanks to Proposition 64, which legalized personal cannabis use and reduced most offenses to misdemeanors, Hannah said.

It won’t, however, alter charges on the manufacturing a controlled substance, conspiracy, allowing drug sales on the premises and carrying a loaded firearm.

The Bennos, longtime activists for medical cannabis users, are facing off with Shasta County in court over a site raided in 2014. They planted 99 plants outdoors to protest a ban on outdoor gardens passed earlier that year. Authorities raided them, charging them with a slew of felonies, most related to cannabis or concentrated cannabis.

The trial is set for Feb. 7, though Tully told Flynn he has a few more requests to file before then.