BENNO AND SONS GOING TO TRIAL NEXT WEEK 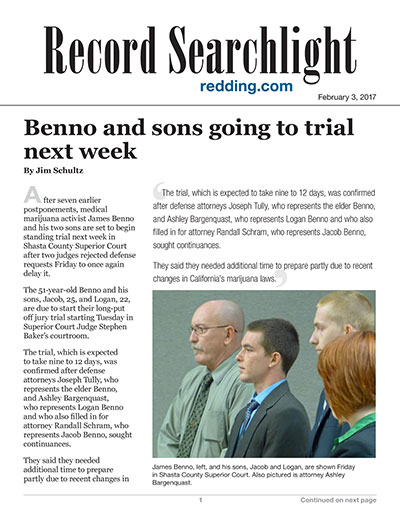 The 51-year-old Benno and his sons, Jacob, 25, and Logan, 22, are due to start their long-put off jury trial starting Tuesday in Superior Court Judge Stephen Baker’s courtroom.

The trial, which is expected to take nine to 12 days, was confirmed after defense attorneys Joseph Tully, who represents the elder Benno, and Ashley Bargenquast, who represents Logan Benno and who also filled in for attorney Randall Schram, who represents Jacob Benno, sought continuances.

They said they needed additional time to prepare partly due to recent changes in California’s marijuana laws, as well as for other related reasons.

Retired Superior Court Judge James Ruggiero, however, denied the continuance requests after determining there was no legal basis to do so.

He also denied a motion by Tully that sought a dismissal of a series of weapons-related charges against his client.

Later, Superior Court Judge Cara Beatty, who assigned Baker as the trial judge, similarly denied the continuance requests, noting there have already been enough delays in the case.

“They (the defendants) want to get this thing over with,” she said. “We’re going forward with this case.”

Benno and his sons were arrested in a 2014 raid at their 100-plant garden in Happy Valley and subsequently charged with a series of felonies mostly related to the cultivation of cannabis or concentrated cannabis.

The felony charges involving growing and sales of marijuana have since been reduced to misdemeanors due to the recent passage of Proposition 64, which legalized personal cannabis use.

But that did not affect other charges, including manufacturing a controlled substance, conspiracy, allowing drug sales on the premises, and carrying a loaded firearm with intent to commit a felony.

Until the passage of Proposition 64, the elder Benno, a well-known medical marijuana activist who has maintained he grew medicinal marijuana to share among 11 patients, had been facing about 17 years in prison if convicted of all the counts against him.

His sons had also faced a maximum of approximately 12 years in prison.

Due to the changes in the law, prosecutor Ben Hanna said all three are looking at about eight or nine years if convicted of the charges against them.