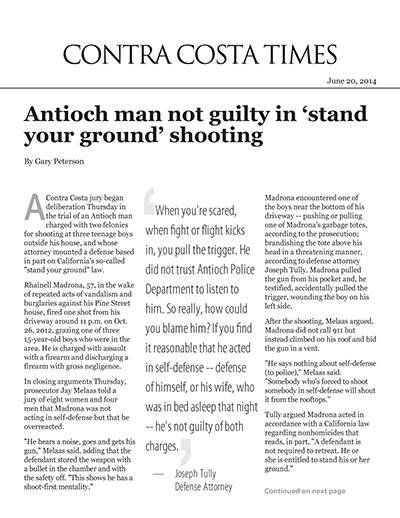 A Contra Costa jury began deliberation Thursday in the trial of an Antioch man charged with two felonies for shooting at three teenage boys outside his house, and whose attorney mounted a defense based in part on California’s so-called “stand your ground” law.

Rhainell Madrona, 57, in the wake of repeated acts of vandalism and burglaries against his Pine Street house, fired one shot from his driveway around 11 p.m. on Oct. 26, 2012, grazing one of three 15-year-old boys who were in the area. He is charged with assault with a firearm and discharging a firearm with gross negligence.

In closing arguments Thursday, prosecutor Jay Melaas told a jury of eight women and four men that Madrona was not acting in self-defense but that he overreacted.

“He hears a noise, goes and gets his gun,” Melaas said, adding that the defendant stored the weapon with a bullet in the chamber and with the safety off. “This shows he has a shoot-first mentality.”

Madrona encountered one of the boys near the bottom of his driveway — pushing or pulling one of Madrona’s garbage totes, according to the prosecution; brandishing the tote above his head in a threatening manner, according to defense attorney Joseph Tully. Madrona pulled the gun from his pocket and, he testified, accidentally pulled the trigger, wounding the boy on his left side.

After the shooting, Melaas argued, Madrona did not call 911 but instead climbed on his roof and hid the gun in a vent.

“He says nothing about self-defense (to police),” Melaas said. “Somebody who’s forced to shoot somebody in self-defense will shout it from the rooftops.”

Tully argued Madrona acted in accordance with a California law regarding nonhomicides that reads, in part, “A defendant is not required to retreat. He or she is entitled to stand his or her ground.”

That law has some similarities to the Florida “stand your ground” statute that was at the heart of the charged Trayvon Martin trial.

The Antioch Police Department, Tully said, was “unwilling or unable to protect Mr. Madrona and his wife.” Therefore, he said, the defendant felt a need to protect himself the night of the shooting when he saw two figures in the street outside his house, and then was confronted by a 5-foot-11 male dressed in black and holding a garbage tote above his head.

“When you’re scared,” Tully told the jury, “when fight or flight kicks in, you pull the trigger. He did not trust Antioch Police Department to listen to him. So really, how could you blame him? If you find it reasonable that he acted in self-defense — defense of himself, or his wife, who was in bed asleep that night — he’s not guilty of both charges.”

“In this case, the defendant overreacted,” Melaas said in his rebuttal to Tully’s argument. “Then he tried to cover it up. It’s that simple.”