A HOLY WOMAN OR A SCAM ARTIST? 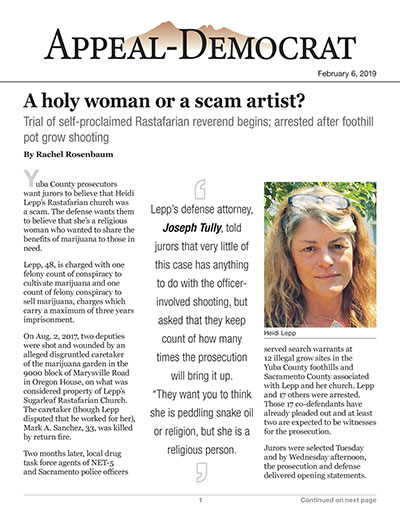 Yuba County prosecutors want jurors to believe that Heidi Lepp’s Rastafarian church was a scam. The defense wants them to believe that she’s a religious woman who wanted to share the benefits of marijuana to those in need.

Lepp, 48, is charged with one felony count of conspiracy to cultivate marijuana and one count of felony conspiracy to sell marijuana, charges which carry a maximum of three years imprisonment.

On Aug. 2, 2017, two deputies were shot and wounded by an alleged disgruntled caretaker of the marijuana garden in the 9000 block of Marysville Road in Oregon House, on what was considered property of Lepp’s Sugarleaf Rastafarian Church. The caretaker (though Lepp disputed that he worked for her), Mark A. Sanchez, 33, was killed by return fire.

Two months later, local drug task force agents of NET-5 and Sacramento police officers served search warrants at 12 illegal grow sites in the Yuba County foothills and Sacramento County associated with Lepp and her church. Lepp and 17 others were arrested. Those 17 co-defendants have already pleaded out and at least two are expected to be witnesses for the prosecution.

Jurors were selected Tuesday and by Wednesday afternoon, the prosecution and defense delivered opening statements. Deputy District Attorney John Vacek said the prosecution only has to prove one overt act of conspiracy to justify a guilty plea, though the department is alleging 24.

Vacek said deputies had been growing awareness of the Sugarleaf Rastafarian Church when happening upon banners on foothill fences saying the property was protected by the church. It came to a head with the officer-involved shooting, Vacek said, and Lepp voluntarily handed over a list of associated grows. He presented jurors with photos from the raids showing plants on the properties and seized marijuana.

One of the men arrested who is expected to testify, Santiago Ochoa, paid a few hundred dollars of a supposed $10,000 total to Lepp to join the church. He joined the church because it allowed him to grow pot, Vacek said.

“They think they got ripped off, they think it was a scam,” Vacek told jurors. “Because in fact, they got nothing for what they paid for; they got raided and arrested … (he told me) this is the Heidi show, she didn’t do shit for us.”

Lepp’s defense attorney, Joseph Tully, told jurors that very little of this case has anything to do with the officer-involved shooting, but asked that they keep count of how many times the prosecution will bring it up.

“They want you to think she is peddling snake oil or religion, but she is a religious person,” Tully told jurors.

He outlined Lepp’s religious background and how she came to use marijuana in the first place: childhood seizures and a car accident as a teen that left her in pain. He also acknowledged her educational background, which included training from a Bay Area university in operating a cannabis business.

Tully also told jurors that when Lepp and her husband started operating Rastafarian churches in 2002, she assisted in filing nonprofit mutual-benefit corporations with the state, and helped establish grow cooperatives for medical marijuana patients. He said that people were only allowed to join the church if they had a documented doctor’s recommendation. And what members received from fees paid to Lepp, Tully said, included business plans, taxpayer IDs, cash bookkeeping training, transport manifestos and consultations on issues like crop insurance. He alleged the money went directly went toward operating the more than 100 churches Lepp was associated with, and that she made no profit.

The crux of the case, he said, is whether or not Lepp made a profit and whether the amount of marijuana seized was reasonable for medical patients’ needs. And the marijuana was a sacrament to their church.

“It’s not about getting high, watching TV and eating Doritos, it’s about a spiritual experience,” Tully said of Lepp and her husband’s beliefs.